There’s no place like home for MHS golf team

After win over Watertown, Melrose embarks on a home stand 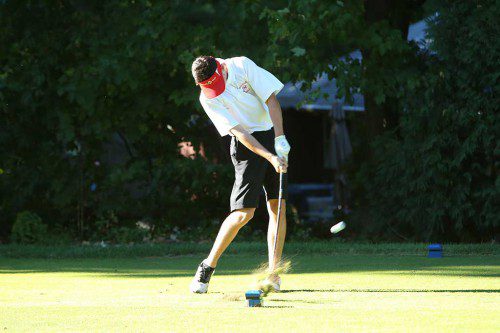 JUSTIN CROWLEY joins Drew McGuire as captain to the 2016 MHS golf team, who scored a victory on Monday over Watertown. (Donna Larsson photo)

MELROSE—The Melrose High Red Raider golf team earned their first win of the season with a  55.5-16.5 victory over Watertown on Monday, September 14.

Melrose (1-2) swept all the top spots, currently held by Melrose’s #1 shooter Zack Farrell, who may be challenged in the top spot this week by #3 shooter Mike Shea, according to longtime Melrose coach Rick McDermod. Battling in the #2 spot is senior captain Justin Crowley, a very experienced golfer who earned victory on Monday. Fellow senior captain Drew McGuire is shooting in the fourth spot, and McDermod tips his cap to both his captains this season. “They’ve been with me since day one, and are both consistent players.”

Sophomore Jack Crowley moves up to #5 this year, followed by Tom Bilbilian, Jay Tucci and Abbey Spencer, who McDermod off season work that improved her game, helping her earn win against Watertown and hold her own against Belmont. Melrose opened the season 0-2, playing talented squads Belmont and Woburn. So this critical league wins came at the perfect time for McDermod.

According to the coach, Melrose enjoys a fairly balanced roster, a healthy mix of upper and lower classmen. “There are a few senior-heavy teams in the league, we’re not one of them. That will help us next year.”

The ML league, meanwhile, remains one of the best in the states; as always, the competition is tough. “We’re looking forward to Lexington this week,” says McDermod. “Obviously they’re strong but we gave them a scare last season on their course. Playing at home here is obviously an advantage for us.” Competing at Bellevue Golf Club is often the difference-maker for Melrose. “We play better at home, I think a lot of teams feel that way. We’re comfortable there.”

As always, so much of their season is not determined by their non league openers but rather their peers in the ML Freedom. Melrose has their best chance against some Freedom rivals such as Stoneham and Wakefield. “We want to beat them and Burlington, for sure.”

They get that chance on Thursday, September 22 when they host Burlington at Bellevue at 3:30 p.m.