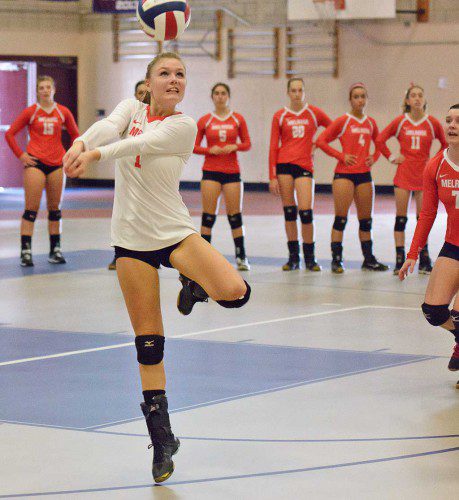 MELROSE—The Melrose High girls’ volleyball team is off to an undefeated start after a trio of wins this week, including a 3-0 home-opener victory over Lexington on Tuesday.

When fans gathered at the Melrose Middle School gym on Tuesday, few knew that Melrose would battle without their leading attacker Victoria Crovo, sidelined due to injury. And while Lexington isn’t usually a team that Melrose struggles to beat, they’re capable of taking advantages of any holes on the floor, and Melrose had given them one.

But for coach Scott Celli and his team, Melrose’s key to victory wasn’t a normal air attack but instead a tenacious display of defense that simply wore out Lexington, spearheaded by senior captain Kaitlyn MacInnes, who played some of the best libero work for MHS in several years, with acrobatic dives and displays that stole points off the ground from tall Minutemen hitters. Melrose’s Saoirse Connolly had an impressive game, leading in offense over the evening with 15 kills, while Melrose’s Cat Torpey outwitted her opponents in hitting, as Melrose took the first two sets with ease. 25-14, 25-17.

Lexington showed plenty of spunk in set 3 and had several chances to flip the tide of the game but fell victim to several outstanding Lady Raider performances, including those from MacIness, Connolly, setter Lily Fitzgerald and the solid serving of Lydia Lombardo and Emily DiPietro. A tense third set went as close as 24-23 in the final moments until Melrose slammed the door for a final 25-23 game winning kill.

So far, it’s smooth sailing for the Lady Raiders, who kicked the season off with two road games last week against Belmont and Lexington. They opened at Belmont on September 7, easily defeating them in sets of 25-12, 25-17 and 25-12. Melrose was led on offense by Victoria Crovo, who had 12 kills while Melrose setter Lily Fitzgerald had 25 assists. On September 8, Melrose swept the Arlington Spy Ponders in straight sets of 25-10, 25-9, 25-15 for a solid 3-0 victory. Leading in attacks were Victoria Crovo with 10 kills, followed by Cat Torpey with 9 and Saoirse Connolly with 7. Lydia Lombardo chipped in with 6.

Melrose will begin a stretch of ML Freedom games this week, including Wakefield, whom they host at 5:00 p.m. on Monday.