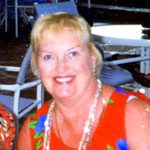 WAKEFIELD — Theresa “Terry” (Bailey) Lane, a resident of Wakefield, passed away peacefully on Tuesday, Oct. 14, 2014 at Oosterman’s Rest Home in Wakefield, at age 86.

Theresa was born in Lancaster, Pa. on Sept. 15, 1928, one of four children of the late James and Mary (Speckman) Bailey. She was raised and educated in Lancaster and met her future husband Martin J. Lane while dancing at a USO event. She and Martin moved to Medford before settling in Wakefield to raise their family.

A homemaker, Terry enjoyed being at home and spending time with her family. She and Martin enjoyed many trips across the country in their RV. She had a particular love of dancing and spent many nights ballroom dancing at Immaculate Conception Church in Malden. After her children had grown and Martin retired, they moved to Sarasota, Fla. where they enjoyed retirement for two decades before returning to New England to be closer to family.

Terry was the beloved wife of the late Martin J. “Marty” Lane with whom she shared 63 years of marriage. Devoted mother of Kevin J. Lane and his wife Cathleen of West Lebanon, N.H.; Lisa O’Connell of North Reading; Robert Lane and his wife Laurie of Reading; Martin J. Lane Jr. of Georgia, and Cathy Fish of Greenville, S.C. Dear sister of Rose McMinn of Lancaster, Pa.; Grace Ivanov of Sarasota, Fla. and the late Samuel Bailey. Loving grandmother of 14 grandchildren and eight great-grandchildren. Also survived by many nieces and nephews.

Funeral Services are private. Interment in Massachusetts National Cemetery, Bourne. For online tribute or to share a memory, visit RobinsonFuneralHome.com. Memorial contributions in Terry’s name may be made to American Cancer Society, 60 Speen St., Framingham MA 01701.