‘Tough day at the office’ 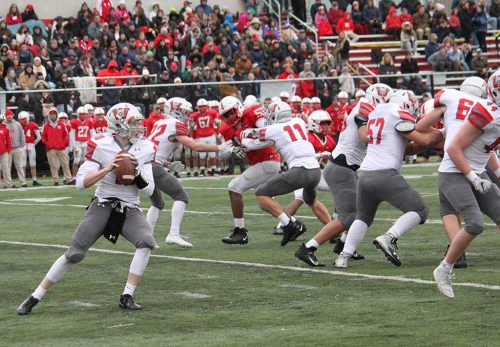 JOE ALDEN drops back to pass on the 60th Thanksgiving Day game between Wakefield and Melrose. (Sharon Nikosey Photo)

MELROSE — “They’re going to the Super Bowl for a reason,” said Wakefield head coach John Rafferty of the Melrose Red Raiders who handed his Warriors a 35-7 loss in yesterday’s 60th Thanksgiving Day game between the two rivals. “That’s a great football team we played today; hats off to them.”

It’s hard to choose where the Red Raiders were most impressive. An offense entering the day averaging 41 points per game and a defense surrendering under 10, Melrose looked every bit the part as they took a commanding 28-0 lead into halftime and cruised to their eighth straight Turkey Day victory.

“It’s not the way we wanted to end it,” said Rafferty. “Tough day at the office.”

The Warriors will never be happy with losing on Thanksgiving, but a look at the big picture is important. A bitter ending to a likely state champion won’t tarnish the progress made for the program in 2019 – not even close. Because the Warriors started the year unsure. With numbers at their lowest in decades, many wondered if a team once at the top of the Middlesex League would ever find their way back. What it required was a good attitude, patience and dedication during what would surely be a rebuilding year.

It wasn’t that exactly.

Led by a senior class who will leave a legacy of pride and leadership matched by few, the Warriors improved dramatically and made it clear their plans for competing now and leaving the program in a promising state. Mission more than accomplished.

“The seniors set the tone for the change in this program, straight up,” said Rafferty. “That class did a great thing for Wakefield football this year and they will always be remembered for that.”

Yes, the loss yesterday proved that Wakefield has a way to go, but there are zero doubts about the direction the Warriors are headed.

Melrose breaks away in first half

The Melrose running game was going downhill all day. There was nothing uniquely special about their scheme – nothing like their depth and talent. Melrose, even without injured leading rusher Chris Cusolito, had the depth to rotate multiple running backs by possession. Junior Matt Hickey was the most impressive, rushing for 131 yards and three touchdowns.

His first was scored from nine yards out on a seven-play 63-yard drive seven minutes into the first quarter. Junior quarterback Brendan Fennell (7 carries 55 yards; 4/8 passing 35 yards) was the other runner doing the damage on that series.

After Wakefield went three-and-out for the second time on their next possession, the Warrior defense stepped up and forced a three-and-out of their own. Junior Danny Hurley made the play of the drive, busting up a Hickey run in the backfield and forcing a 3rd-and-long that wouldn’t be converted.

Wakefield’s first time moving the chains happened thanks to two 15-yard penalties on the same play. A roughing the passer and late hit personal foul in the secondary on 3rd-and-8 from their own 19 upset Melrose head coach Tim Morris to a near abrupt end. But rather than a fate of helping the family prepare their turkey early, the coach eventually let his defense do the talking as the Red Raiders stuffed a running attempt for a 3-yard loss on the next play and wouldn’t let Wakefield get another yard on the drive, forcing another punt early in the second quarter.

The Red Raiders wasted no time in building off the momentum, scoring in just four plays, one minute and 20 seconds. Two Fennell runs brought the rock from the 28 to the 42. Billy Pesce (6 carries, 106 yards, 1 TD) ran it to the Wakefield 49 and Hickey took off for a 49-yard touchdown on the next play to give the home team a 14-0 lead with 10 minutes left in the half.

Wakefield again went three-and-out, the busy Hurley sending another nice punt from his own 34 to the Melrose 26.

The Red Raiders scored even faster on this drive. Hickey ran it to their own 40 and on the next play, a rested Pesce had the legs this time to out-do his running mate for a 60-yard touchdown run and a commanding 21-0 lead.

The Warrior offense got some mojo going on their second play from scrimmage during their next drive as QB Joe Alden found fellow senior Wesley Pierre for a 38-yard reception on a wheel route down the left sideline. Wakefield’s leading rusher Aidan Sweeney (16 carries, 78 yards 1 TD) was contained to just 17 yards in the first half and the Warriors tried to get him going on three inside trap runs starting at the Melrose 32 but only nine yards were gained. Wakefield threw an incomplete pass on second down and Sweeney came up just one yard short on 4th down.

The most telling sign of Wakefield’s future was on the sideline at this point. Down big to a rolling freight train, the Warriors stayed positive on the bench. It’s one of those immeasurable qualities that Wakefield improved on this year, and yes, it does make a difference to a team’s culture.

Melrose then put together a nine-play, 76-yard drive, scoring on their third straight possession to take complete control at 28-0. A 39-yard run from Sean Herbert was the highlight. He later punched it in from the 1.

The halftime break at a raw and rainy Fred Green Field featured electric performances from both the Wakefield dance team and the Warrior Marching Band who played their award-winning “Route 66” show.

Melrose kept their foot on the gas in the third quarter, scoring on their fourth straight possession as Hickey followed up a 38-yard run to the Wakefield 18 by later crossing the plane from 2 yards out. Sophomore kicker Zach Federico was 5-for-5 on PAT’s in this one.

After Wakefield went three-and-out, the defense forced a turnover on downs. Melrose, facing a 4th-and-1 on their own 44, lined up in punt formation but punter Alexander Brincheiro caught the ball and took off, running 22 yards for a first down. It’s unclear whether it was a fake call or a broken play. Either way, Wakefield had to bear down defending at their 34. The Warriors allowed just eight yards on four straight runs. A gang tackle for no gain on 2nd-and-10 was the highlight as senior captain Liam Cosgrove, Pierre, senior Dan Lamonica and sophomore Luke Ickes all busted through the line to make the play.

There have been shutouts on Thanksgiving as recently as 2011 and 2006, but the Warriors haven’t been shut out on the holiday since a 0-0 tie in 1990. Wakefield made sure that wouldn’t happen as they drove 72 yards in 10 plays starting with a minute left in the third quarter and ending in the fourth.

Sweeney collected 55 rushing yards on the scoring drive, including a 3-yard TD run. The sophomore took one 19 yards on 2nd-and-11 from the 27 and Pierre then took it 18 yards into Melrose territory.

Sweeney kept rolling with runs of 20 then 11 yards to get it to the 3 and Wakefield eventually punched it in. It was the sophomore’s team-high 22nd TD of the season.

“The guys up front did a great job and Sweeney ran well,” said Rafferty of that drive. “We got the job done on that series.”

Unfortunately for the visitors it would be their last drive of 2019. Wakefield finished with an overall record of 6-5 while Melrose moves to 11-0 and will now get ready to play Plymouth South in the Super Bowl on Dec. 7.

The Warrior seniors, who put an emphasis on unity this year, were the key architects during what was a critical season for Wakefield football. Cosgrove, Anthony DeVito, Chris Miller, Pierre, Alden, Lamonica, Taaj Andrews, Jake Sowyrda, Joe Bernabeo, Sean Lynch, Eli Gosselin-Smoske, Jamie Poole and Jovanni Teixeira didn’t just fuse as a group; they brought together every student athlete who plays football, no matter the grade, and turned an uncertain situation into Wakefield’s first winning season since 2013 – with plenty more to come if the culture they helped create remains strong.