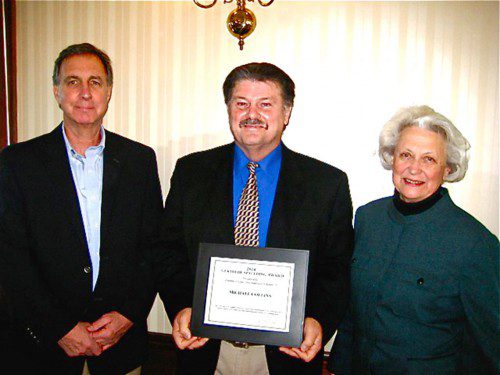 FROM THE LEFT ARE Bill Conley, FOLQ presdent; Mike Collins, Wakefield Town Engineer, and Karen Faler, FOLQ Board of Directors.

The presentation occurred during the FOLQ Fall Breakfast on Nov. 23.

The prestigious award is given out annually to an individual who has made an outstanding contribution toward “protecting and enhancing the waters of Lake Quannapowitt and its surrounding lands” — the mission of Friends of Lake Quannapowitt (FOLQ), which is a broad-based local citizens’ organization.

During the presentation, Mike’s contribution over the years to various projects important to the Lake environment was highlighted.

Particularly noted were his leadership in the Colonel Connelly Park renovation and in heading up the Lake Study Committee recently appointed by Selectmen to examine issues of water quality and possible interventions.

This has entailed organizing a gigantic amount of information for committee members. Also emphasized was the passion Mike brings to his role, resulting in his exceeding expectations. “Mike gives a good name to public service. People like Mike need to be recognized publicly.”

In addition to the framed plaque Mike Collins received at the event, he will also be honored by an engraved brick placed at the entrance to Colonel Connelly Park’s flagpole plaza.