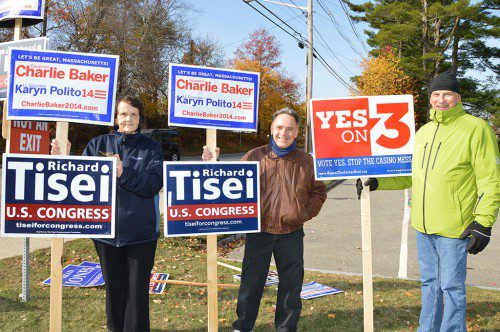 NORTH READING — With control of the Governor’s office, the Sixth District Congressional seat and four hotly contested ballot questions hanging in the balance, North Reading voters went to the polls in droves on Tuesday, voting reliably Republican in eight out of nine contested offices on the ballot.

Republican Charlie Baker swamped Democrat Martha Coakley for governor here by greater than 2 to 1, 4,011 to 1,985 votes, 64 percent to 32 percent. United Independent Party candidate Evan Falchuk pulled 153 votes, about 2.4 percent and independent candidates Scott Lively and Jeff McCormick pulled 36 and 21 votes respectively. Statewide, Falchuk met his goal of achieving 3 percent of the vote, enough to qualify on the ballot in the next election cycle.

In the Sixth Congressional District, Salem Democrat Seth Moulton lost North Reading to Wakefield Republican, Richard Tisei, 2,679 to 3,236, or 43 percent to 52 percent. An independent candidate, Christopher J. Stockwell, pulled 196 votes here. These results were not typical of the district, however, as Moulton, who defeated nine–term Democratic incumbent John Tierney in the September primary, beat back Tisei by 15 points, keeping the state’s congressional delegation all Democratic.

Election officials were very pleased with the town’s voter turnout of 57 percent, which was very steady all day and especially heavy especially in the morning, when it almost looked like a presidential year. With 11,007 registered voters, 6,271 found the time on a lovely fall day to make the trek to St. Theresa Church to cast a ballot.

The only contested statewide office in which local voters did not opt for a Republican was Secretary of State, where long time incumbent William Francis Galvin, a Democrat, beat back GOP candidate David D’Arcangelo, 3,442 to 2,389. 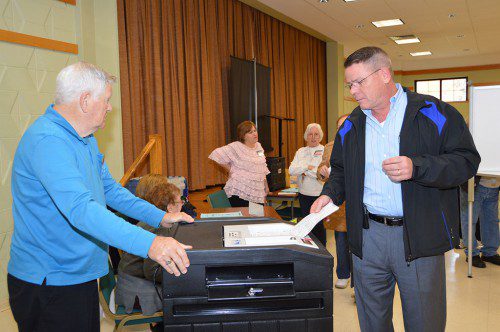 HE’S NOT ON THE BALLOT, but that didn’t stop Town Moderator John Murphy from casting his vote in Precinct 4 on Tuesday. At left is election worker Ron Annand. (Bob Turosz Photo)

State Rep. Brad Jones Jr. of North Reading may not have had an opponent, but he still polled an impressive 82 percent of the vote. Sen Bruce Tarr did almost as well here, with 79 percent. Both are Republicans.

In Question 2, voters overwhelmingly defeated an expansion of the state’s Bottle Bill Law to include water and sports drinks, 5,244 to 984. That’s and 84 percent margin.

Question 4, a requirement that employees in Massachusetts are entitled to earn and use sick time, was defeated here (but not in the state as a whole). Local voters opted 3,267 to 2,897 in favor of the “No” side.