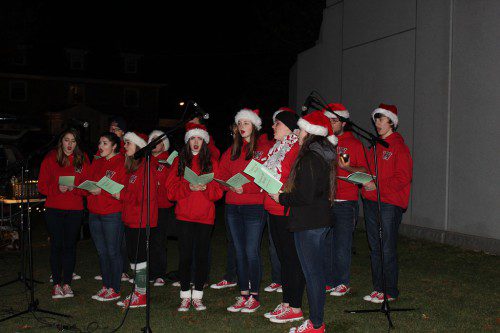 WAKEFIELD — As in years past, Wakefield hummed with the sounds of thousands of people singing, laughing and enjoying the sights on Saturday, Dec. 3 — the day of the annual “Tis the Season” Holiday Stroll.

There was live music and dance everywhere — inside banks, on street corners and on the steps of the Beebe Library. And, of course, there were plenty of tasty treats to enjoy. Cookies, candy canes, hot cocoa and roasted marshmallows were there for the taking.

In the interest of safety and in keeping with the tradition of past years, portions of Main and Albion streets were closed to traffic

The event kicked off at the Americal Civic Center at 1:30 p.m. where “Tis the Season” Holiday Stroll tote bags were offered to shoppers.

Following the fun at Wakefield’s Civic Center, which included games, arts and crafts and photo ops with cartoon characters for the younger set, not to mention cookies and candy, everyone lined up outside at 3 p.m. for the Holiday Stroll Hat Parade. Some of the hats spotted this year jingled with bells, were made of paper or had reindeer antlers attached. Of course, Wakefield Memorial High School’s Marching Band led the way.

Sponsors of the event were Wakefield Co-operative Bank, The Savings Bank and Melrose-Wakefield Hospital, among many others. Event Planning Committee Chairman Paul DiNocco expressed his many thanks to everyone for making this year’s “Tis the Season” Holiday Stroll a success.