Miscues in sixth result in 7-1 setback to Medford 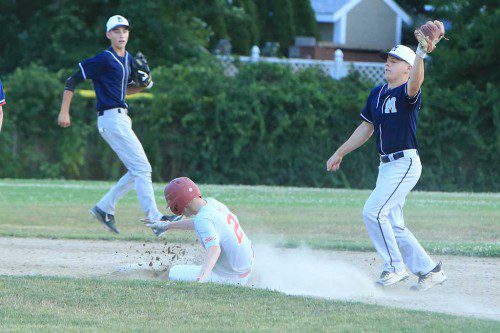 TYLER PUGSLEY steals second base after his second single of the game in the fifth inning. The Townies A team dropped a 7-1 decision to Medford last night at Walsh Field for only its second loss of the season. (Donna Larsson Photo)

WAKEFIELD — Any baseball team can have a bad game. It happens to the best of ballclubs. However the Wakefield Townies A team had just one terrible inning and that proved to the difference in the outcome of its Lou Tompkins All Star Baseball League A Division contest last night at Walsh Field.

Wakefield had a four error sixth inning which resulted in five unearned runs as it dropped a 7-1 decision to Medford.

The Townies lost just for the second time this season as they now are 10-2-1 on the season. Wakefield also lost to Medford in its first game of the season, but had gone unbeaten in 11 games prior to last night.

Wakefield beat Revere by a 15-6 score at Revere High School on July 19 and tied the Brookline Red, 3-3, on July 21. Over this past weekend, the Townies defeated Framingham by an 8-2 score on Saturday night at Long Field and Groton by a 4-2 tally on Sunday at Sullivan Park.

The Townies remained in first place in East standings in the A Division while Medford increased its season record to 9-1 in the East. Medford has played just 10 games and will be scrambling to make up some games before the playoffs begin.

As for last night, the Townies held a 1-0 lead after plating a run in the third inning. But the lead evaporated in the top of the sixth inning as Medford sent 10 batters to the plate and tallied five runs. The visitors had a little help from the Townies as well.

Joe Marinez reached second on an error at third base. After a ground ball out to shortstop, Jake Whistler singled to left field to score Marinez to tie the game. After Whistler stole second base, a fly ball to center field resulted in the second out. But a fly ball to left field which was dropped allowed Whistler to score and Scott Andrew to reach first base.

After an errant pickoff throw by Wakefield starter Colin Jaena, Jeff Fargo reached on an error at shortstop as Andrew came around and scored to put Medford in front, 3-1. Mike Ramasci doubled to left-center field and Brendan Kelley had a two-run single to right field which plated pinch-runner Chavez Colon and Ramasci to give Medford a 5-1 advantage.

The visitors tacked on two more runs in the top of the seventh against reliever Kevin DeLeary. Marinez reached on an infield hit to third base and stole second. Mike O’Brien walked. After the first out was recorded, John Doyle singled to left field to load the bases. Andrew got a base hit to left field to score Marinez. Fargo lifted a sacrifice fly ball to center field to score O’Brien with the final run of the contest.

Jaena started the game for the Townies and went five and two-thirds innings giving up four runs (all unearned) on five hits. The right-hander walked three and struck out none.

Cole Kraus hurled a third of an inning getting touched up for an unearned run on three hits. He also struck out a batter.

DeLeary pitched the one frame giving up two runs on three three hits while walking a batter.

Meanwhile, Medford right-hander Andrew went the distance and kept the Townies bats in check. Andrew gave up one run (unearned) on five hits while striking out six and walking two. He also threw a wild pitch.

Leading the way at the plate for the Townies was leadoff hitter Tyler Pugsley as he had two singles and a stolen base.

Mike Lucey, Brendan Coughlin and Jaena had the other three hits for Wakefield. Coughlin’s hit was a double.

In the last of the first inning, DeLeary walked with one out but was forced at second base. In the second, Coughlin had a two out double to right field. However a strikeout ended the frame.

Wakefield took a 1-0 lead in the third inning but squandered a chance for an even bigger advantage.

Nick Porter reached on an error at shortstop to begin the frame. Jaena and Pugsley singled to right field to load the bases with no outs. A wild pitch brought in Porter but a clutch hit eluded the Townies as Andrew retired the next three batters to minimize the damage.

Lucey singled to left field to lead off the fourth inning but Medford turned a 1-6-3 double play for two quick outs. Coughlin then walked but a fly ball to center field ended the frame.

In the fifth, Pugsley had a two out single to right field and stole second base. But a ground ball to third base ended the inning and Pugsley was the last Wakefield base runner of the contest as the Townies went in order in both the sixth and seventh innings.

Medford also had its chances in the early going before it broke through late in the contest.

O’Brien had a one single to second base in the first but Wakefield turned an inning ending 5-4-3 double play.

Donahue and Nick Carlino both walked with one out. But a pop up to second and a ground ball prevented Medford from scoring.

Kelley reached on infield hit to third base and took second on the throwing error from third with two outs. But a ground out by the next batter resulted in the game remaining 1-0.

But Medford broke through in the sixth inning and turned the contest entirely around to sweep Wakefield in the season series.

The Townies are at home on Saturday at 5 p.m. when they host Parkway at Walsh Field. Wakefield then has a game on Tuesday, Aug. 2 against the North End at 7 p.m. at Puopolo Field. The Townies host the Brookline Blue on Thursday, Aug. 4 at 5:30 p.m. at Walsh Field in their final scheduled game for the regular season.