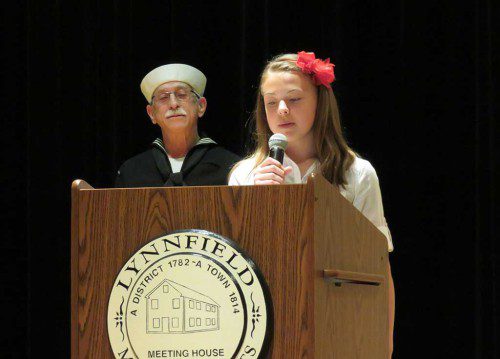 LYNNFIELD —While rain forced the cancellation of the Memorial Day parade and visits to veterans’ graves at the town’s five cemeteries, it failed to dampen the resolve of those attending the ceremony at LMS to never forget those who gave the ultimate sacrifice to the cause of freedom.

Lynnfield’s Boy Scouts still presented the colors in the auditorium and though their guns were silenced for the traditional ceremonial volley, a five-member Honor Guard comprised of members of Lynnfield’s American Legion Post 131 solemnly stood watch over the proceedings.

In advance of Memorial Day, each veterans’ grave in town, going back to the Revolutionary War, was decorated with a crisp new American flag by dedicated volunteers such as the fifth grade students of teacher Mark Vermont.

Three fifth-graders also walked to the podium and addressed those in attendance. They are Hannah Gromko, John Anthony Tavano and Maddie Daigle.

Regardless of the weather, the message delivered by the day’s keynote speakers also reinforced the importance to never forget those who served and gave their lives.

“We put our servicemen and servicewomen in harm’s way every single day. We are here today to recognize and honor those who never came home – the brave men and women who paid the ultimate sacrifice to serve, protect and defend our great nation. By doing that, we collectively share our heartfelt sorrow and gratitude,” said Veterans’ Services Officer Bruce Siegel, himself a Vietnam Navy veteran as well as the parade marshal and organizer of the town’s Memorial Day observances.

Siegel added, “Veterans make us humble. They teach us lessons. As heroes, they face death for others with no thought of personal gain or glory. The sacrifices our veterans have made should not be forgotten. With profound respect and admiration, I thank all who have served, and those who continue to serve this great country.”

Siegel advised that in addition to celebrating the heroism of those who serve and those who have lost their lives, townspeople “should also maintain Memorial Day as a time of mourning and a day to remember those cherished men and women who bravely faced death so that we could live harmoniously at peace now and in the future. We must never forget the sacrifices made by America’s fallen heroes.”

Selectman Christopher Barrett welcomed those in attendance on behalf of the board and the town, and thanked the volunteers who placed flags throughout town such as the Boy Scouts, Girl Scouts, K of C, Red Cross, American Legion and Mark Vermont’s students to ensure that their sacrifices will not be forgotten.

Barrett said these gestures “remind everyone that the ‘Land of the Blue and Gold forever bleeds Red, White and Blue with American pride!’”

Barrett thanked the town’s first responders, whom he called “heroes among us who are always ready to answer the call to serve, protect and defend all that we hold and cherish.”

“Today we pause as a nation, but as we always do here in Lynnfield, we gather as a community to pay our respects and acknowledge the significant contribution our town has made for the cause of liberty.  From the very first shots fired in Lexington and Concord to the current War on Terror, men and women from Lynnfield – our true Lynnfield Pioneers – have always been first to answer the call of duty,” Barrett said.

“When we consider our heroic heritage, it truly is fitting that we call ourselves Pioneers.  The very definition of a pioneer is a person who is first to explore and settle a new country.  How true this is when we consider the many Lynnfield Pioneers who made the first sacrifice to settle and establish this country and the multitudes since who continue to defend her to this very day,” he continued

“Across from the historic Town Meeting House is the grave of a young father and husband, Daniel Townsend, who left his loving wife and children to answer Paul Revere’s call to defend the Cause of Liberty on April 19, 1775.  He answered that fateful call and became one of the very first Americans to lose his life defending liberty.  That Cause of Liberty didn’t end on that historic April morning, but has continued for well over two centuries since that, ‘Shot heard ‘round the world,’” Barrett said.

“A short distance from Lynnfield High School is a monument and park dedicated to Allan Jordan who, like Daniel Townsend before him, was a young man with much of his life and dreams ahead of him.  This Lynnfield Pioneer – this true American Hero – was selfless and put aside his dreams for his country and ended up making the ultimate sacrifice defending that same eternal Cause of Liberty in Vietnam,”  he said.

“Centuries may separate Pioneer heroes likes Daniel Townsend, Allan Jordan and many, many others, but the eternal Cause of Liberty bonds them forever as close brethren in this immortal struggle for liberty that started on that April morning in 1775 and continues to this very moment,” Barrett said.

“Our small town has been blessed with an abundance of heroes who are always ready and willing to rise up and defend the Cause of Liberty!  This story remains strong and relevant today because of the significant sacrifice of our own heroic veterans.”

“Because of our veterans, our National Anthem can still proudly state, after more than two centuries, that ‘our Star Spangled Banner yet waves over the Land of the Free and the Home of the Brave,’” Barrett believes. “Some even say that our Star Spangled Banner does not fly because the wind blows it, but rather it flies because of the last breath of every soldier who died defending it.  Let us never forget that many of those last breaths came from soldiers who proudly called Lynnfield their beloved home.”

“Today we pay our respects and mourn the more than one million service members who died defending our great nation. But, in a much larger sense, we should take this time to thank Almighty God that such men and women lived!” Barrett said.

Delivering the keynote address was special guest speaker Col. (Ret.) Joseph Connell, who recently retired as an Army officer after multiple deployments to war zones, particularly in the Middle East.

Connell used the opportunity to education the general public about the importance of the Memorial Day holiday and its continued relevance to the nation’s collective consciousness 150 years after the first Memorial Day observance in Waterloo, N.Y. at the behest of druggist Henry C. Welles. This tiny town, whose population only numbers 5,000 today, lost 58 sons during the Civil War.

Connell said that back in 1866 Welles “encouraged his neighbors to place flowers on the graves of their fallen sons and husbands to honor those who gave their lives.”

The nation’s first Memorial Day was recognized 16 years later, in 1882 as a way to set aside a day to “remember and honor the sacrifice of those who died in all our nation’s wars,” he said.

Reconnecting Americans to their history

Connell said Memorial Day “is not the day to celebrate veterans who returned home safely. Today is the day that has been made for the ones who left home, but did not return. We gather in order to remember those who have made the ultimate sacrifice for us, and to pay them homage. The observance of this day was born of compassion and empathy.”

“Memorial Day is the time for Americans to reconnect with their history and core values by honoring those who gave their lives for the ideals we cherish,” said Connell.

“More than a 1.2 million American service members died in the wars and conflicts this nation fought since the first colonial soldiers took up arms in 1775 to fight for independence. Each person who died during those conflicts was a loved one cherished by family and friends. Each was a loss to the community and the nation. Memorial Day is just not about those that have left us, but also about those who are still here today; the families, friends, and loved ones remembering them; and keeping their name and sacrifice alive,” Connell said.

Connell said it saddens him to hear that, “many Americans have lost this connection with their history and the meaning of Memorial Day,” especially in this part of the country where the fight for independence began.

But Connell remains hopeful that through education, people can be taught about the importance of honoring the country’s war dead. For instance, there are “Military cemeteries in every state and in 25 permanent American burial grounds outside the United States, 130,000 buried, 124,000 missing in action, located in 16 foreign countries. Our war dead are buried in these overseas resting places, resting were they fought and died with their fellow service members. The cemeteries are maintained by the Arlington, Virginia-based American Battle Monuments Commission,” he said, adding that they are “among the most beautiful and meticulously maintained shrines in the world; to be visited by all.”

However, education on a smaller scale at the local level can also have a profound impact, Connell believes, such as the efforts made by LMS students to write cards “to our current veterans serving in war zones, knowing all do not come home.” Another example he gave was a project similar to the one Mark Vermont leads annually with his students in the town’s old burying grounds. Connell’s sister is a teacher who takes her own four children to the state Military Cemetery at Otis where they put flags on graves together.

“There is good out there; just look and see. Don’t be a nay-sayer, talk our talk, spread education in a positive way to educate; it’s the better way,” Connell said.

“I encourage you to join in the effort to spread the word about  Memorial Day. What will your story be about your loved one or friend? What do we do as the town of Lynnfield?”

“We in this country owe a great debt of gratitude to those who sacrificed their lives so that we could live free. We can start to pay that debt by not forgetting, but by always remembering what they did and what they stood for,” he said.

“Remember those that gave their lives, so that we may continue to live in freedom,” Connell concluded.

Normally, a free cookout for all attendees follows the town’s Memorial Day celebration. But the rain forced the cancellation of that too. Therefore, Siegel has arranged to hold a patriotic themed party for the townspeople to enjoy, that also includes music on Wednesday, June 22 with a rain date of Thursday, June 23.

The cookout will be held from 6-8 p.m. and given its patriotic theme, Siegel encourages attendees to decorate their carriages, bikes and scooters in red, white and blue. All children attending will also receive flags.