The eagles have landed at Suntaug Lake 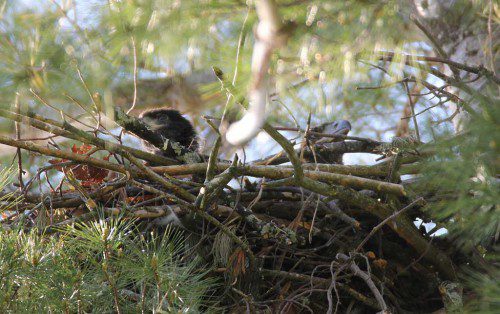 THIS PAIR of baby American Bald Eagles in their well-hidden nest 75 feet above the ground near Suntaug Lake was photographed on May 21 by Lynnfield resident Patrick Curley. It is the second pair of bald eagles born in this nest since their parents took up residence at the lake last year. (Patrick Curley Photo)

LYNNFIELD — Great news! The Suntaug Eagles have returned to their nest at the lake where they are successfully rearing another pair of American Bald Eagle chicks.

Local resident and “eagle enthusiast” Patrick Curley has been anxiously monitoring the nest and the activity of the pair of Bald Eagles for weeks. Earlier this spring, he said the eagles returned to the massive six-foot wide and three-foot deep nest they built last year high up in a tree near the shore of Suntaug Lake. This is the same nest in which they successfully fledged a pair of chicks last year and Curley remained hopeful that they would return again this year.

Last week, Curley was thrilled with his most recent discovery.

“I visited the Bald Eagle nest early this morning and found two babies peering over the edge of the nest down at me. I feel like a proud daddy!” he informed the Villager, noting that he has been “watching the nest nervously for weeks.”

“For the last few weeks, I saw no activity and I was really worried they had not successfully given birth. Then a couple nights ago, I saw one of the adult eagles on the rim of the nest reaching down into the nest as if feeding babies. I did not have binoculars or my telephoto lens so I could not be sure what was going on. But I was newly optimistic,” he recalled.

On the morning of May 21, Curley awoke early, armed himself with his telephoto lens, and headed out to the nest.

“When I got to the nest, I did not see anything at first.  Then I thought I saw something brown moving ever so slightly.  I looked through my lens and couldn’t believe what I saw: Two healthy eagle babies! Wow – what a sight!”

He noted the babies are “already pretty good size.” Since there was no sign of the parents that morning he presumed they were out hunting for their hungry brood.

It likely would have been rather difficult to get a photo of the baby chicks if their parents had been around.

Now that this mating pair of eagles has returned to this its nest at Suntaug Lake for the second year in row, Curley is confident they have established this area as their territory.

“My understanding is that so long as the adult eagles continue to mate successfully and raise babies in this nest, they will return each year to nest there again. The baby eagles, which will be nearly adult size by the fall, will fly off to find their own new terrain,” he said.

According to Curley, the juveniles eagles will not develop the distinctive white feathers on their heads until they reach breeding maturity at about age four or five.

“It is really difficult getting a clear photo shot into the nest since I am on the ground and the nest is 75 feet up, and there are trees and branches all around,” Curley emphasized. He added that the morning sun “rises over the side of Suntaug Lake opposite the nest and beams down at an angle directly into the lens of my camera pointing up at the nest.” Despite the difficulty presented by such obstacles, he was able to capture a rather clear photo of both baby chicks, which already have their distinctive curved beaks and piercing eyes.

It is Curley’s hope that a webcam could be installed inside or near the nest next spring. “I think all the Lynnfield Schools and Lynnfield residents would want to track their native Bald Eagles’ nest activity.  I am researching how to accomplish this,” he said, stating he is taking into consideration the cost, proper equipment and finding a contractor capable of doing it.