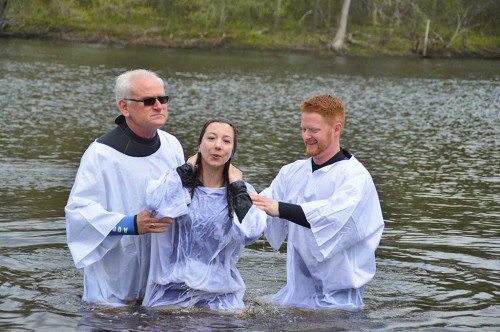 JENNIE O’BRIEN as the first of 14 candidates baptized in the Ipswich River on Sunday on the occasion of Trinity Evangelical Church’s 200th anniversary. (Bob Turosz Photo)

NORTH READING – Trinity Evangelical Church celebrated the 200th anniversary of its founding on Sunday, returning to the banks of the Ipswich River in North Reading where, in 1816, two women, Mrs. Carter and Mrs. Fanny Flint, were baptized in the river by a black Baptist pastor from Salem, the Rev. Dr. Lucius Bolles.

In those days, this area was just the north parish of Reading and it would have been hard to recognize that this was the founding of a vision and a church that would endure for two centuries. But that vision and endurance were celebrated by several hundred people on Sunday, underneath a huge tent at Ipswich River Park with a special service in prayer and song honoring the past and welcoming the future.

The service concluded not on the banks of the Ipswich River, but in it as 14 candidates for baptism – from the very young to the not-so-very-young – were baptized by immersion in the ice cold river waters, much as those two women were baptized in 1816.

For most of its history, the church was known as the First Baptist Church, officially changing its name in 2001. Sen. Tarr said the church’s history is testament to the fact that, “if we have doubt, when we have faith, we can prosper, we can continue and we can remain strong.”

Church Senior Pastor Rev. George Ray envisioned that day in 1816, when 10 other people joined the two ladies to witness their baptism in the village. “You can imagine the horses tethered to the trees, the carriages, the people gathered there by the riverside to publicly proclaim they were followers of Jesus Christ.

“It is out of that experience that the Baptist movement started and the beginning of a church was envisioned. Almost one year later, on April 16, 1817, the First Baptist Church of North Reading, now known as Trinity Evangelical Church, was incorporated,” he said.

The church was born in difficult times. 1816 was known as the Year Without a Summer, and the Year of Poverty, when six inches of snow fell in June and crops failed widely. When the church was founded, there was at first great resistance in the area, including legal action to try to stop it in its infancy, Rev. Ray said. Despite that, the early church pioneers persevered and overcame the obstacles and challenges.

History of the church

The First Baptist Church (today known as Trinity Evangelical) was born in the midst of America’s Second Great Religious Awakening of 1800-1830, an evangelical movement that swept the entire eastern portion of the newly established United States.

In 1816, the Rev. Dr. Lucius Bolles, a black Baptist pastor from Salem, baptized two women from the north parish of Reading in the portion of the Ipswich River that today runs through the center of North Reading. Mr. William Whitteredge subsequently became interested in the Baptist movement and left the local north parish Congregational Church. The First Baptist Church was formally organized with 24 members on April 16, 1817. Meetings began in the Whitteredge home with visiting Baptist preachers and moved to a local school house until opposition arose from the local parish.

The first church building was built in the town center and was lost to a “suspicious” fire in 1860. The second church was completed on the present site in 1866 and it, too was lost to fire in 1927. The third sanctuary, now referred to as the “Old Sanctuary,” was completed in 1928. An education wing was added in 1960 that now includes staff offices and child care as well as the Sunday School rooms. In 1997, the church built the new 520 seat sanctuary and fellowship hall.

Since 1828, the church has had 37 pastors, including the present Senior Pastor, the Rev. George Ray, who is a 1982 graduate of Gordon-Conwell Theological Seminary. In 1998, Pastor Ray became the longest serving pastor in the history of the church and this year marks the completion of his 33rd year.

Through the 1980s the church experienced a renewal that brought people from various backgrounds and traditions, resulting in the church becoming independent, with the establishment of a governing Body of Elders and formal withdrawal from the American Baptist Church.

In the 1990s, the church experienced significant growth that today involves 650 active congregants from over 40 different North Shore and Merrimack Valley communities. In 2001, the name was changed to Trinity Evangelical Church.