Melrose takes out Stoneham, Lynnfield on eve of playoffs 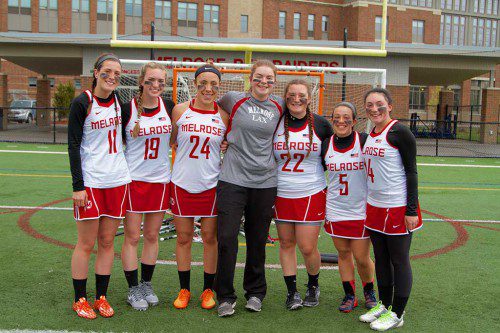 MELROSE — The MHS girls’ lacrosse team righted course this week with back-to-back victories that improved their season record to 10-5 with playoffs on the horizon. Melrose bounced back after a 5 game losing streak with a 16-1 victory over Stoneham (1-18) on May 20 at Fred Green Field in Melrose on an occasion that marked Seniro Night. On Monday they beat a more competitive Lynnfield (10-7) at Fred Green Field in Melrose by a score of 10-7.

Melrose offense has regained their footing in recent meetings, outscoring opponents 26-8. On Monday, Melrose counted on four goals from Abby Cunningham to help reverse the tide against an athletic Pioneer team, who took an early lead of 1-0 in the opening minutes of play when Caroline Buckley struck past Melrose goalie Sarah Foote, who had several saves in the first, fending off a slew of Pioneer free shots. Melrose’s Katie Baraw tied it up 1-1 three minutes into the game before Lynnfield’s Caroline Buckley gave the Pioneers the edge at 2-1 at 17:47. Melrose offense appeared stymied by Pioneer defense and by halftime Lynnfield held a 3-1 lead.

The Lady Raiders returned recharged and began an onslaught of scoring, including Abby Cunningham, who began her first of four goals in the opening minute of the second half, hitting a shot that reduced Melrose deficit to 3-2. Lynnfield’s Murphy struck again to make it a 4-2 game. Melrose’s Linnea Kelley entered the game at goalie for Sarah Foote and performed admirably with 5 saves. Lynnfield took a lead of 5-3 before Melrose’s Katie Baraw made it a 5-4 game at 16:40. Hayley Rodriguez tied it up at 5-5 and another goal from Abby Cunningham gave Melrose their first lead of the game at 6-5 and momentum needed to win.

Additional goals came from Haley Mate, Abby Cunningham (2) and Lucie Coleman which led to a final 10-7 victory. Melrose successfully killed the clock in the final minute to preserve the win.

Melrose enjoyed an easy victory over Stoneham on May 20 by a score of 16-1, led by senior captain Haley Mate who had 5 goals. Leonora Ivers chipped in with 3, Katie Baraw 2, Hayley Rodriguez 2, Lucie Coleman 1, Lily Cunningham 1, Shannon Jones 1, and Mia Francazio 1.

MIAA playoff seedings will be released this Friday, May 27. Melrose will hope to secure a possible home opener in the Div. 2 North bracket where they are projected to be a possible 6th seed, according to laxpower.net. Fans are encouraged to visit www.miaa.net for up to date playoff information.