Plenty of cause for celebration for Raider lax 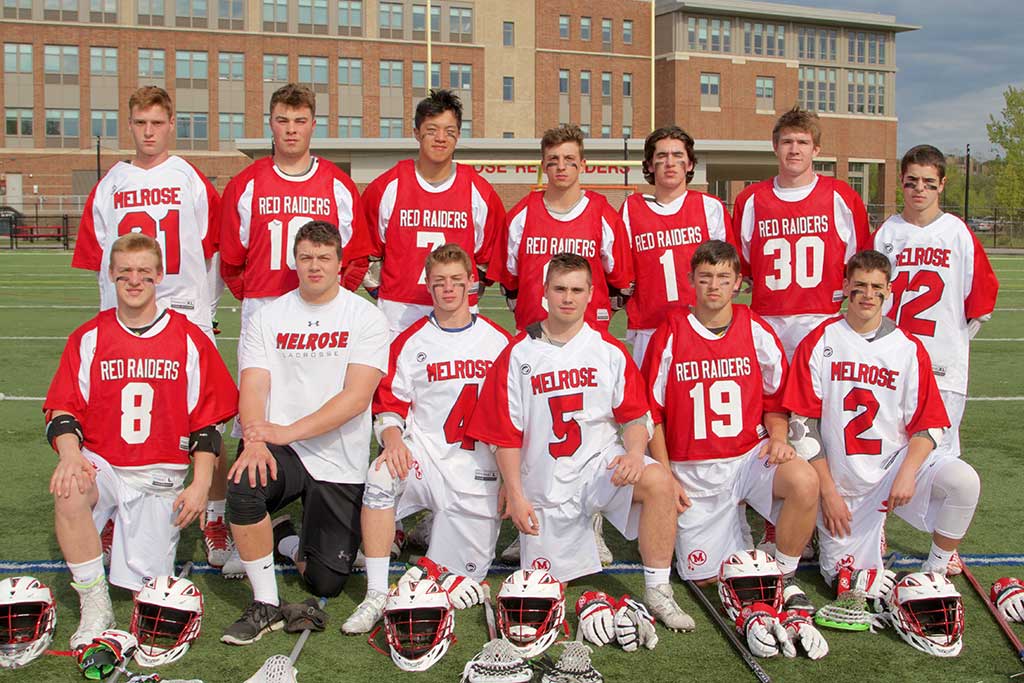 MELROSE — The 12-6 Melrose Red Raider lacrosse team finished their regular season with a pair of wins last week on the eve of Div. 2 North playoffs, set to begin sometime next week. Melrose posted wins last week over Stoneham and Watertown by wide margins of 19-8 (Watertown) and 15-5 (Stoneham), while also falling in a heartbreaker to top-ranked Beverly (18-1) on May 19 by a score of 14-13, nearly forcing overtime in the final minute of play.

Melrose enters playoffs at 12-6, a slightly deceptive record given the quality of schedule. It’s worth noting that Melrose has not fallen more than 4 goals behind historically tough teams, many Div. 1, and during those games Raiders were limited by injury. At full capacity now, (with the exception of Cam Hickey, out for season) Melrose hopes to have used those games as learning tools. Says Melrose head coach Matt James, “I’d rather take 6 losses in the regular season and go deeper in playoffs than earn easy wins that don’t help up with our goal, which is to win a few playoffs games or possibly go deep in postseason.”

One of those challenging teams was Beverly, to whom Melrose fell in a heartbreaker on Thursday, May 19 at Fred Green Field. Melrose relied on their most seasoned scorers to battle the Panthers; and Jack Siebert led with four goals, followed by Mike Pedrini and Will Mandracchia at 3, Corbin White with two and Ryan McDermott 1. The two teams played nose-to-nose and Melrose took a third quarter lead before Beverly gained a 2 goal advantage with two minutes left to play. Melrose was able to add a goal to make it a 14-13 game and won the ensuing face off, but Beverly executed excellent defense and was able to retain the ball and kill the clock.

After the game, coach James noted the great rivalry between the two. “They’re one of the top teams in the state and we played really close with playoffs last year. This game felt like that – they’re always a team we look forward to playing every year,” he said.

Melrose’s effort against Stoneham on May 20 at Fred Green Field in Melrose was less competitive but it allowed Red Raider Jack Brennan his first varsity goal, showed solid work from Justin Auger. During the team’s 19-8 win over Watertown, Melrose enjoyed a collection of attackers who scored including the varsity debut goals of Kyle Farris and Joe Colozzo.

At the net, Connor Locke remains steady. “He’s playing well and turned a corner about 4-5 games ago,” says James.

Melrose has seen an outstanding season from Jack Siebert who recently broke the record of most points in a single season at 101. He also leads the team with 67 goals. His teammate Mike Pedrini recently broke CJ Hanson’s single season record for midfielder goals at 51. And thanks to their winning spring, Melrose assistant coach Nick Voight was named Assistant Coach of the Year by the league.

It’s been a historic season to reflect on but Melrose remains forward thinking as they prepare this week for playoffs. According to James, Melrose will focus on getting their newly-healthy players back in shape and working on situational defense. “When we are at full capacity, we can compete with anyone,” he says.

The MIAA will announce it’s Div. 2 North playoff bracket this Friday. Melrose can expect to be ranked as high as fourth in Div. 2 North. Fans are encouraged to visit www.miaa.net for up to date game information.