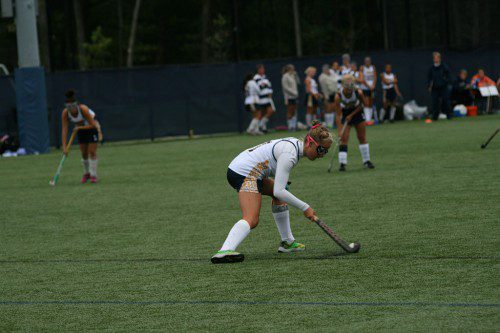 ASHLEY BARRETT pushes the ball up field in the Pioneers’ 4-0 shutout over Amesbury Friday. With 24 goals scored by the team to date, Lynnfield’s offensive dominance has been aided by the ability of the backs and midfielders to feed the ball successfully to the forward line. (Maria Terris Photo)

LYNNFIELD — The Pioneer field hockey team’s domination of the North Shore was solidified last week as the team posted its eighth shutout in nine games.

For their efforts, Lynnfield remains in first place in the large school Kinney Division of the Cape Ann League with a league record of 7-0-1 and an overall record of 7-0-2 for 16 points.

Lynnfield is one win ahead of Triton (6-1-1) and two wins ahead of Masconomet (5-1-2) in the Kinney standings. The only other undefeated team in the CAL is Manchester-Essex, which leads the small school Baker Division in the CAL standings with a record of 8-0-0 (overall 9-0-0). 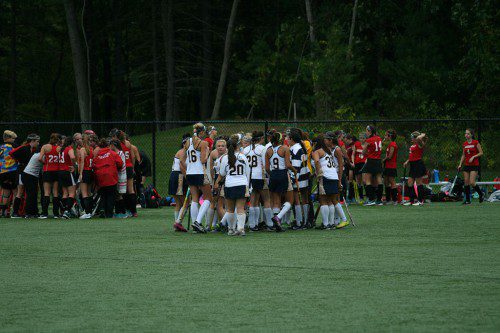 THE FIELD HOCKEY team regroups during a timeout against Amesbury. All 21 varsity players contributed to Lynnfield’s 4-0 win over the Indians in the team’s eighth shutout of the year last Friday to maintain first place in the CAL large division. (Maria Terris Photo)

The Pioneers traveled to Beverly last Thursday to take on the Panthers in a non-league game, which ended in a scoreless tie.

“We completely dominated the Beverly game, but could not capitalize when in the circle,” commented head coach Mamie Reardon after the tie. She added that it was “such a shame as the girls really played well from 25 to 25, but just couldn’t connect around the goal.”

Another indication of Lynnfield’s dominance over Beverly was the fact that their goalie, Lydia Picariello, did not have to face a single shot on net throughout the entire game as the Pioneers kept the Panthers out of striking range.

The next day, on a rainy and raw Friday afternoon, Lynnfield shut out Amesbury at home 4-0. It was the team’s eighth shutout of the year.

Senior captain Jaylin Grabau scored first, unassisted. “She brought the ball into the circle and used a reverse stick hit,” Reardon said. Senior Elise Murphy scored the second goal of the game “from a pass from captain Lilli Patterson to make the score 2-0 at half,” she said.

“All 21 varsity players got into the game today and all contributed to this win!” she said.

Between the pipes, Lydia Picariello earned seven saves. With nine games behind them, Lynnfield has scored two dozen goals while only giving up one goal to date, three weeks ago in the 1-1 tie versus Masconomet Sept. 14.

Asked about her team’s offensive dominance, Reardon said, “I think our midfielders and backs have contributed to the offense’s dominance by continually feeding the forwards the ball.”

This fact, combined with the ability of Lynnfield’s forwards to make “passes to the open person and (their) aggressiveness in the circle has been key” in their quest to generate goals, she said.

In what may very well turn out to be a battle of the unbeatens, the Pioneers will challenge the Manchester-Essex Hornets at home on Thursday, Oct. 6 at 3:45 p.m.

Next Monday, on Columbus Day, they’ll travel to Georgetown to take on the Royals (2-5-1) and will compete in a non-league rematch against Beverly next Wednesday, Oct. 12, also at 3:45 p.m.