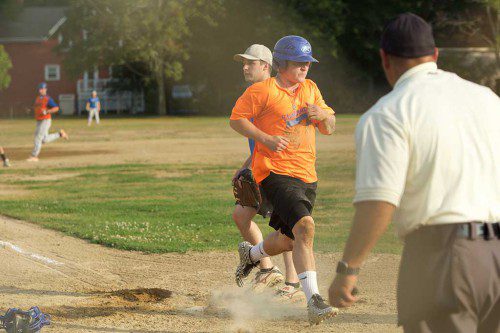 BRANDON PANARESE, shown here earlier in the season, had the game-winning RBI single — one of his five hits on the night — as the Unknowns took a barn burner against the Expos. (Donna Larsson file photo)

WAKEFIELD—The Unknowns and Expos played game two of the Twi League Series on Sunday at Moulton Field. With the win in game one, the Unknowns looked to take a commanding 2-0 lead. It wasn’t easy as the two teams played a 10-inning marathon, ultimately ending in a 7-6 Unknowns victory.
Tom Caron got the start on the mound for the Unknowns, who were the home team in game two. He pitched well through four innings, not allowing a run, but he ran into trouble in the fifth.
John Richards got the start on the other side for the Expos. He retired the side in order in the first, working around a leadoff single by Brandon Panarese. The following batter, Geoff Erickson, lined into an unassisted double play by the second baseman Steve Boghos. Richards got Chad Dwyer to go down on strikes to end the inning unscathed.
After the Expos went in order in the second, the Unknowns drew first blood with a pair of runs in the bottom of the inning. A pair of walks to lead off the inning proved costly for Richards as both runners advanced on a wild pitch came around to score on a Bryan Butt RBI single. The rally was short lived as Richards was aided by his defense once again turning a double play and then ending the inning with a strikeout.
An error by the left fielder led off the top of the third and allowed Anthony Bruzzeze to make it all the way to third base. Despite an infield single and the runner advancing to second on the throw, the Expos failed to bring the runners home and left two in scoring position.
Back to back singles from Greg Erickson and Panerese led off the bottom of the third for the Unknowns. A sacrifice moved the runners up into scoring position and Dwyer reached on a ball on the infield that didn’t advance any runners. With the bases loaded Richards got Graham Robertson to strike out and Brendan Cobb to ground to second for the unassisted putout to end the inning without allowing any runners home.
In the top of the fourth the Expos got a one-out single by Nick Roberto, who then stole second but was stranded in scoring position when Dave McDonald flew out to left and Dennis Diccico struck out looking.
Richards hunkered down in the fourth and the Unknowns didn’t come up with any kind of scoring threat as they went down in order.
Caron had been cruising through the first four innings, but he hit a snag in the top of the fifth. A pair of walks to Mike Cannata and Bruzzeze started off the inning poorly, then a base hit by Boghos spelled the end of Caron’s night.
In relief, Adam Chanley came in with the bases loaded and surrendered a run on a wild pitch and an RBI single to the pitcher, Richards. Chanley got John Grossi to pop to third for the first out, but an RBI single by Chris McNall immediately after plated a pair of runs to make the score 4-2, Expos. McNall came around to score on a two-out RBI single by Roberto to cap off the five run fifth inning.
The Unknowns found themselves trailing for the first time in the series but were able to scrape a run back in their half of the fifth inning. Greg Erickson led off with a double. He was retired on a fielder’s choice and replaced on the base paths by Panarese with one down. After a single by Geoff Erickson advanced Panarese to third, he scored on a Chad Dwyer RBI single to make it 4-3.
Chanley struck Diccico out to begin the top of the sixth for the Unknowns. With one down, Cannata worked a walk and Bruzzeze singled. A pair of errors on the Unknowns allowed Cannata to come home and Bruzzeze to reach third. Next batter was Boghos, who grounded to first, so there were now two away. Richards worked a two-out walk and stole second base, but Chanley struck out Grossi to end the inning.
With a 6-3 lead, the Expos took the field in the bottom of the sixth. The inning started ominously for the Expos as an error allowed Bryan Butt to reach and Kevin Murray followed with a base hit. The momentum swung for the Expos as Richards got Chanley to strike out looking, and Greg Erickson to ground out to first for the second out. However, Brandon Panarese came through with the clutch two-out two RBIi single to make it 6-5. Panarese came home as Richards got Geoff Erickson to ground to third but McDonald throw was errant and Panarese’s run counted and Erickson made it around to third. Richards got Dwyer to ground out to end the inning but the damage had been done and the Unknowns had tied the score at 6.
In the top of the seventh for the Expos, the first two batters went down rather easily with a pop to first and a strikeout. Roberto worked a two-out walk off Chanley, but McDonald grounded to Erickson at short who tagged second himself to retire the side.
Richards was back out on the mound for the Expos in the bottom seventh and he started out the inning well with Robertson flying out to centerfield and Cobb bouncing to second base for the 4-3 put out for out number two. Following a two-out single by Butt, pinch runner Sean Alexander stole second to move into scoring position with two-outs, but was stranded when Richards got Murray to go down swinging for the third out to send the game into extra-innings.