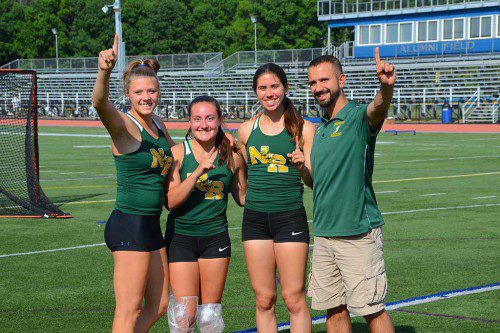 NORTH READING has the best pole vault team in the state! From left: Julia Valenti, Rachel Hill, Victoria Grasso, and Coach Sotirios Pintzopoulos. Valenti finished first with a mark of 12 feet 4 inches and Hill was runner up at 10 feet 4 inches. (John Friberg Photo)

WESTFIELD — Three captains from the NRHS girls spring track team, (Julia Valenti, Julia McDonald and Jenna Raffael) as well as sophomore Rachel Hill and freshman Megan Lawlor competed at Saturday’s All–State Girls track championship at Westfield State College, where the top three individuals and relays from each division meet to determine who really is the best of the best.

The NRHS girls team was fifth with 24 points. Julia Valenti scored 16 points for the team while Rachel Hill scored 18. The highlight of the meet was definitely the 1–2 North Reading finish in the pole vault All–State Championship. 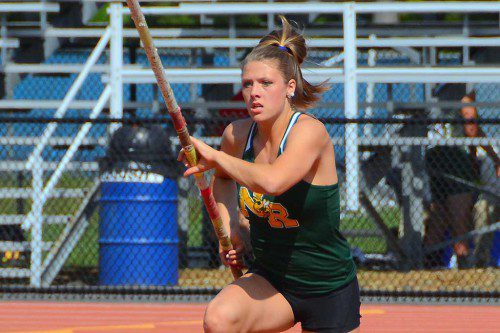 HORNET SENIOR Julia Valenti is the picture of determination on this approach before clearing the bar at 12 feet, four inches to capture the all–state pole vault title. (John Friberg Photo)

Julia Valenti cleared 12 feet 4 inches, qualifying her for the National Championships and Rachel Hill cleared 10 feet 6 inches. It’s rare to have an All–State Champion in any event, especially from a Division 4 team, let alone first and second place in the meet.

Valenti defended her All State Championship from last year by winning the event, which is a first back–to–back title in school history. She is the third All State Champion in school history, the others being Shannon Conway, (400 meters in 2008) and Cole Godzinski (100 meter hurdles in 2014). Rachel Hill is a sophomore and is looking to continue NRHS’s winning ways in the pole vault in the future.