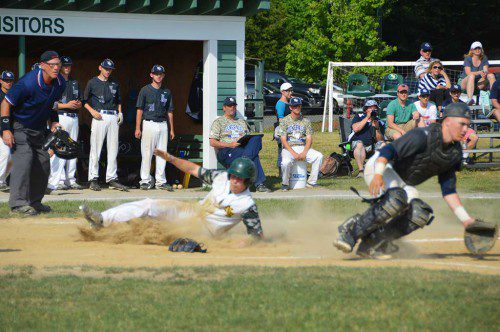 SAFE AT THE PLATE. Hornet first baseman Sean Castro slides home with the sixth North Reading run in the second inning, when it looked like the home team might run away with the game. Castro scored another run late in the game. (Bob Turosz Photo)

NORTH READING — On Monday afternoon, the North Reading High baseball team defeated Northeast Tech, 7–2, in the Division 3 North State Tournament quarterfinals. With that win, the top-seeded Hornets improved to 19-3 and they played East Boston on Wednesday afternoon in the semi–finals at Fraser Field in Lynn (results were not available at press time).

The ninth–seeded Black Knights, meanwhile, ended the year at 13–7 as the Hornets beat them three times this spring.

“We played very well,” said Hornets manager Eric Archambault. “We got back to what we were doing earlier in the season.”

Northeast plated one in the top of the fourth to cut the lead to two but the Hornets put the game on ice with three runs in the sixth.

Greg Johnson was the winning pitcher going all seven innings to go to 5–1. He gave up two runs, six hits, two walks and he struck out five.

The Hornet offense had ten his led by Jeff Mejia who went 3 for 4 while Shawn DiVecchia was 2 for 3 with two runs batted in.

Jared Valade had a two run single for his lone hit while John Merullo added an RBI single.

Hornets sweep Generals on the season

In the first round game on Saturday, the Hornets beat guest Hamilton–Wenham, 10-7, in a high-scoring affair. The Hornets went 2–0 against the Generals this season.

“This was the first playoff game as a group for us,” said Archambault. “We hit well but the defense were very uncharacteristic.”

North Reading then closed the door scoring once in the fifth and two more times in the sixth. Hamilton–Wenham then scored twice in the seventh.

Mike McCauley went to 8–1 on the hill going four innings. He gave up five runs but only one was earned. He gave up three hits, four walks and he struck out one.

If the Hornets won on Wednesday, they would play in the North final sometime this weekend (opponent and location unknown at press time).