Vinum: the wine shop where everybody knows your name 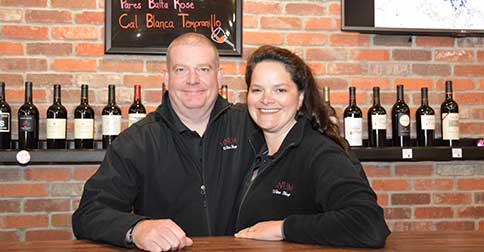 MIDDLETON – When John and Samantha Miller opened Vinum, their fine wine and craft beer shop on Route 114 in Middleton just about a year ago, they sensed the timing was right for their business model, which was to offer quality wines from smaller wineries around the world, plus a distinctive selection of craft beers mostly from New England – all with personal service and knowledgeable advice.

As things developed, their timing was perfect. “It turned out to be the right time for us and the right time for Middleton,” said John. “We have been busy since the day we opened the door.” Vinum is located at 210B Main St., (Route 114), next to Eva’s Organic Butcher Shop and just down the road from Richardson’s Dairy.

John and Samantha are 16 year residents of North Reading and Vinum is very much a family business, reflecting the couple’s expertise and experience. John has 20+ years’ experience in the wine industry as a salesman and consultant. Samantha is a teacher at the Hilltop Nursery School who, in a former life, was bar manager at 75 Chestnut St., a fine Beacon Hill Restaurant. (That’s how the couple met, over the wine list, and they’ve been married 16 years … but that’s another story).

“Most of the people come through the door and want really interesting craft beer and the same for the wine,” said John. We’ve had an occasional person come in and ask for white Zinfandel, but it’s very rare. One of the things we worried about was whether we could open up and not have the big brands like Kendall-Jackson that you find in the big stores. And the answer is yes.”

Good wine doesn’t have to be expensive and Vinum proves that. There’s a featured selection of wines for $8, $9 and $10, with plenty in the $20 to $25 range and up. “We have had a lot of people say ‘I don’t recognize these labels.’ We take that as a compliment. We have different wines here.”

Vinum offers wine tastings every Thursday and craft beer tastings every Wednesday and they’ll gladly spend time with their customers every day of the week to help them choose the right wine or special craft beer.

After spending most of the last 20 years on the road as a salesman and wine consultant, John enjoys owning his own business 10 minutes from home. “It’s very different coming to work for yourself because everything you do is an investment in yourself. The biggest pressure comes from within.”

In the beginning Vinum’s first customers were from the butcher shop next door, which turned out to be a symbiotic relationship. “That was huge for us,” said Samantha. Now Vinum does a wine tasting on Thursday nights that works with the dinners held at the butcher shop. “They taste the wine here and know it will go well with the steak next door.”

“We have value in this store because we don’t carry the big brands,” said John. “What you pay for here is in the bottle and not on the label or in an advertisement. These are family owned wineries, sustainably grown. Our bottle average is high here but you’re getting good value. If you spend $20 here, it’s going to taste like a $30 bottle.”

When the Millers opened the shop the most expensive bottle of wine was $33. Now it’s over $100, purely through customer demand. Their customer base includes Middleton, North Reading, Danvers, North Andover and Boxford – people looking for a different, hands-on experience and the fact they can taste a lot of the wines.

The first thing a customer notices when walking in is that Vinum doesn’t look like a liquor store. In fact, with the exposed brick wall and track lighting, it looks like a wine cellar with a tasting bar and tables. The second thing they notice is that the shop is 100 percent temperature controlled, in the crisp 60’s, perfect for the storage of wine. Pick up a bottle on the hottest summer day. It’s cool to the touch.

The wine selection is thoughtfully assembled from around the world. California and Washington state are of course there, but there’s also France, Italy, Spain, Germany, New Zealand, Australia and Argentina. John has tasted most of what’s available and was very familiar with what he wanted to carry. “It’s a daunting task but one you have to do fastidiously. Price point was important, I wanted to be sure we have a nice blend of $10 wine, $20 wine and beyond. Now that we’ve been open a year the inventory kind of takes care of itself because we see what’s working and not working.”

Looking for a Malbec from Argentina? Cabernet or sauvignon blanc? A white pinot noir from Oregon? Right over here. “We’re probably the only wine store in Massachusetts that has pinot noir red, rose and white. And they’re all delicious,” John said.

“It’s a very well made wine, the kind I love to stock. It’s a perfect product for us. We want to find the little secret things that aren’t stacked up” in the big stores. At $18 a bottle, the cabernet is in a very competitive category and sells well.

The craft beer selection was assembled with the same care. There’s mead from Ipswich, cider from Salem and craft beers from Newburyport and Ipswich, Lynn, Plymouth, Everett. Originally when Vinum opened, their craft beers were all from New England but since then other sections of the country have been added. Everything is available cold.

You can actually build your own six pack or choose the local IPA sampler from Plymouth, Woburn, Lynn and Newburyport. Wine and beer tasting is basically available all the time because the Millers invested in a machine that uses argon gas to keep a bottle of wine fresh for up to two weeks.

The Millers’ philosophy for wine tastings is to let the customers take the lead. John and Samantha are there talk to you, tell you what’s new, show you on a map where it comes from and maybe ask about your golf game.

“It’s the whole thing from the Cheers TV show, ‘where everybody knows your name.’ That’s what people want. The buy local thing is important, it’s a throwback to an earlier time. I think that’s a great thing.” said John.

Vinum is open Monday through Saturday from 11 a.m. to 7 p.m. and Sunday from 11 to 6 p.m. Visit their website at vinumwineshop.com.