Volleyball team should ace tests in 2016 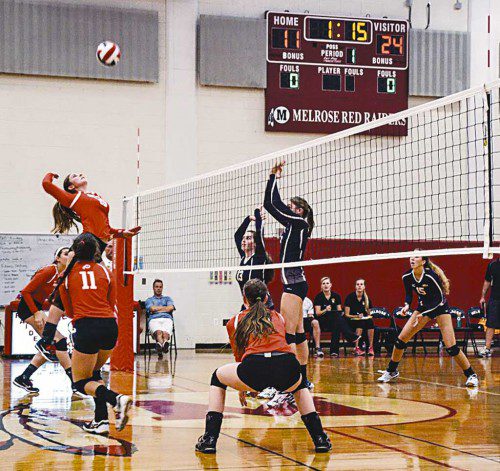 THE MELROSE Lady Raider volleyball team returns to 2016 after another league championship and 21-3 season. (file photo)

MELROSE — The start of fall season means the return of the Melrose Lady Raider volleyball team, a local dynasty who hits the floor this week after another league-clinching 21-3 season last season. Earning an M.L. title their 14th time in 16 years, Melrose gives no reason to believe this season will differ. The team began road play this week and will open at home on Tuesday, Sept. 13 against Lexington.
Melrose, undefeated at 15-0 in the Middlesex League last season, returns to the floor most of their starters, including their senior captains Victoria Crovo, Kaitlyn MacInnes and Cat Torpey.
Crovo is entering her fourth season on the team and has brought years of powerful hitting and serving. “Victoria is our three year captain, and she’s never missed one game since freshman year,” says Melrose head coach Scott Celli. “I believe she’s played in every game since her freshman debut, so we are always expecting big things from her.”
Also helping on offense this season is senior captain Cat Torpey, a middle hitter whose height is a distinct advantage for the team. Returning players Saoirse Connolly, Lydia Lombardo and Julia Symonds should also see time as outside hitters this season. This quartet will need to fill in the shoes of graduates Marissa Cataldo and Hannah Mulcahey, both all-star hitters. “Coming into the season our biggest need was hitting,” says Celli. “So far the group has stepped up.”
Senior captain Kaitlyn MacIness returns in the libero position. The head of defense will be aided with back row defensive play from Emily DiPietro, Katie Donovan and Jill Mercer, while Mary Kate Mahoney and Daniela Cataldo will also be in the mix.
One of the most promising returns is of sophomore setter Lily Fitzgerald, whose 2015 season Celli describes as “phenomenal.” Count on Fitzgerald to effortlessly aide Melrose hitters as they take on the local competition.
Three freshmen, Mary Kate Mahoney, Emma Randolph and Erin Torpey, join the squad and they’re a trio that Celli is excited about. Making the cut on the team is not easy – nearly 70 girls tried out and only 14 made the varsity squad; thus, it speaks tons to their abilities.
Serving as JV coach this season (replacing Steve Wall) is Ryan Schmidt, a Melrose resident and current asst. volleyball coach at St. John’s Prep. Serving as assistant coach on varsity to Celli this year is Melrose High alum and former Lady Raider Athena Ziavras, while the job of freshman coach will be held by former MHS volleyball captain, Kelly O’Neill.
As always, Celli continues to fill his schedule with the highest quality opponents. This year may be the toughest to date, with teams such as Frontier, Newton North, Arlington Catholic and Westboro all on the horizon. This is exactly the way the coach has planned it, because in order to sustain a deep playoff run, Melrose will need to compete with the best. Look for Div. 2 North rivals Arlington Catholic, Bishop Fenwick and Winchester to all have the potential to be playoff foes.
Celli notes that Melrose’s goal, as always, is to remain an upper echelon team of Division 2. “Of course, who doesn’t want to return to States, right?” he says. “But we are taking it one step at a time. We want to stay healthy, remain very competitive and go far.”
Celli notes that there is a strong team chemistry that lends itself to a bit of serendipity on the court. “The girls are very bonded, they spend time together off the court,” he says. “Our senior captains have really helped create a family atmosphere that make this a special group. There is something in the air with them. I have a good feeling.”
Melrose begins play this week on the road against Belmont and Arlington before their home opener on Tuesday, Sept. 13. They will host Lexington at 5 p.m. at the Melrose Middle School gym.