Wakefield boys’ tennis continues to pave a road to states 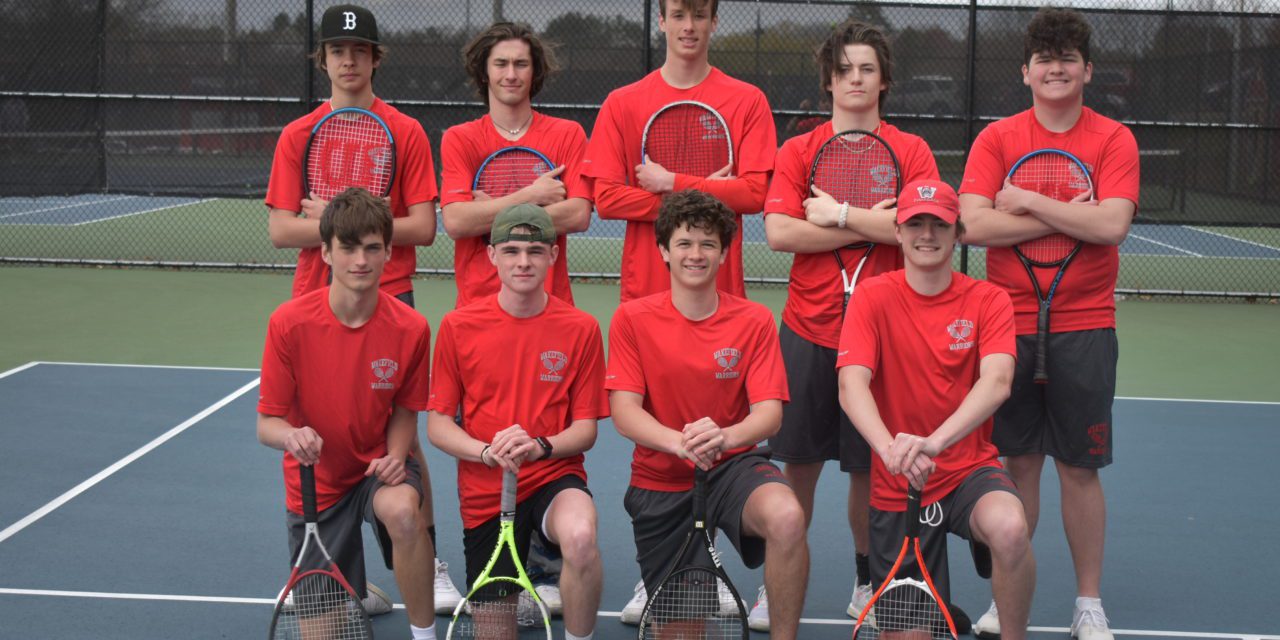 THE SENIORS have led the Wakefield High boys’ tennis team to a a perfect 5-0 record in the Freedom Division including two exciting wins recently, first over Burlington on Friday and then over Wilmington on Monday. (Courtesy Photo)

READING — The Wakefield High boys’ tennis team is riding high after epic wins against some solid teams in the Middlesex League’s Freedom Division.

On Thursday, Wakefield faced off against the Reading Rockets, a team they have typically struggled against. But the boys showed no signs of struggle that day, dominating the match with a 4-1 win.

The first doubles team of Michael Leary and Kyle Russell had a bit of a roller coaster ride, winning the first set 6-2 but dropping the second 1-6. In true Leary/Russell fashion, they pulled out a win in the third, 6-2. The boys nearly swept the match, with the second doubles duo of Alex Fata and Kevin DeGray losing in a third set tiebreaker (4-6, 7-6, 6-10).

“The Reading coach told me he didn’t believe Wakefield had beaten one of his teams during his tenure. Considering he started during the Kennedy Administration, this would be quite the achievement,” said Robertson. “It was a great win and nice to see some young blood in Wakefield playing great tennis.”

But the match-up Wakefield had been waiting for was Burlington on Friday night.

The Red Devils were the one team in the Freedom Division that the Warriors had yet to beat.

And it wasn’t going to be easy.

A week earlier, Burlington defeated Arlington 3-2, a team that Wakefield lost to 4-1. Burlington only lost one match in the Freedom Division against Wilmington. In order for Wakefield to remain on top in the Freedom, they needed to take down the Red Devils.

Luke Greif also had a challenging match at second singles. Greif won the first set 6-4 but found himself down 1-4 in the second set. Greif battled back, winning the next four games and finally clinching the second set 7-5.

At third singles, Matt Conley’s consistency and chip shots proved too much for his opponent and he won 6-4, 6-3.

With the score in matches tied at 2-2, the pressure was on the first doubles team of Michael Leary and Kyle Russell. As all of the other matches had finished, both teams rallied around the court to cheer on their teammates. Leary and Russell lost the first set 4-6 but dug deep to win the second set 6-1.

It all came down to the third set. Leary and Russell had a slow start and got down 2-4 but this duo has a penchant for defying the odds.

With Leary dominating the net, Russell strategically placing the ball and the whole team cheering at the fence, they were able to win the next four games, securing the team win for Wakefield.

“I couldn’t be prouder of this team,” said coach Cheryl Connors. “The grit and determination of these boys is amazing. In my 14 years of coaching, this is one of the most competitive group of players I’ve had the pleasure of watching. Even when they get down, they find a way to turn things around. They’ve got no quit.”

With two weeks left in the regular season, Wakefield will play all of their Freedom Division opponents for a second time. The Warriors started this week off against a strong team from Wilmington. Like Burlington, the Wildcats have only one loss this season which was against Wakefield, 4-1.

On Monday afternoon, Wakefield was a man down with number one singles player, Ben Palmer, unable to play. Coach Connors was also out for the match leaving assistant coach Sandy Palmer at the helm. Coach Palmer had to do some quick juggling of the line-up and put Luke Greif at first singles, Matt Conley at second singles and Kevin DeGray at third singles. Russell and Leary stayed at first doubles and Zach Harter partnered up with Alex Fata at second doubles.

Conley had a very even match against his opponent which resulted in long rallies from the baseline. The first set went to 6-6 but Conley lost a close tiebreaker, 6-8. After getting down in the second set, Conley tied it up at 4-4. The last two games were an intense physical battle and Conley ended up dropping the set 6-4.

DeGray, playing his first singles match of the season, had a lot of challenging points but eventually fell to an experienced singles player 6-0, 6-1.

At second doubles, Alex Fata made some amazing defensive shots while his partner, Zach Harter, was able to put balls away at the net. For never having played together, Fata and Harter had a dominating win, losing just two games with a score of 6-1, 6-1.

Once again, first doubles had a prolonged battle with the match going three sets. Like the match against Burlington, Leary and Russell found themselves down, losing the first set 4-6. But the pair stepped up their game and got back to basics, with Leary playing the net while Russell put up some nice, defensive lobs. They took the second set 6-3. Leary and Russell found themselves in familiar territory having to win a third set. The score was close throughout the set but they were able to pull out a critical win, 7-5.

For the second time in three days, the individual matches were tied, 2-2. Whichever team won first singles would win the match. Both teams huddled around court 1 to cheer on their players. Greif got off to a slow start losing the first set 6-2 but found his groove in the second, winning 6-4. The third set stayed close for the first six games but Greif was able to pull ahead, winning the final set 6-3.

“These boys had so many challenges thrown at them today – playing in different positions, playing with a different partner, missing a teammate and their head coach. But they took it all in stride,” said assistant Coach Palmer. “I love their determination. The fact that they are open to changing strategies when necessary is refreshing. It was a huge win today.”

Wakefield is currently 7-4 overall and 5-0 in the Freedom Division. The Warriors travel to Melrose on Wednesday and Stoneham on Friday. Both matches start at 4 p.m.