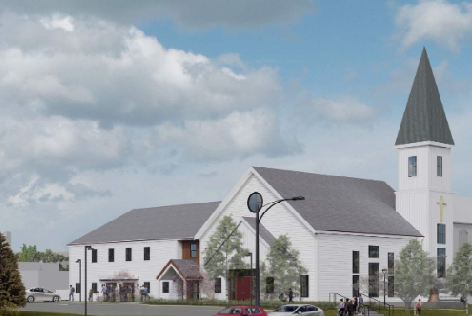 WAKEFIELD — Three and a half years after their original church was destroyed by a devastating fire, the First Baptist congregation is ready to rebuild on the site of the original structure at the corner of Common and Lafayette streets.

The Zoning Board of Appeals recently gave the project the green light to move forward.

Representing the church, attorney Brian McGrail expected that at least two meetings with the ZBA would be needed. But after listening to the plans for just over an hour, the Zoning Board gave the project its blessing.

On top of that, he said, because the church was destroyed by fire, local bylaws provide liberal “rights of restoration.” The bylaw says that after a fire, a structure may be restored as long as the proposed restoration is not substantially more nonconforming than the original structure.

McGrail said that he has had discussions with both Building Inspector Benjamin DeChristoforo and Town Counsel Thomas Mullen and both agreed with McGrail’s legal assessment.

In the end, the ZBA agreed too, affirming the Church’s right to build their new house of worship on the original site according to the plans they presented to the board.

Those plans have been in the works for nearly a year, McGrail said. They involve building a new church that will be somewhat smaller than the original one. The footprint of the old church was 11,700 square feet. The new building will occupy 7,720 square feet on the site.

The new church will also be smaller in terms of height. The main part of the old church was 82 feet high with a 180-foot steeple.

The new building will be 41 feet high with a 90-foot tower.

The congregation plans to rebuild in two phases. The entire two-story church will be constructed by the end of 2023, but at first only the ground floor, including the sanctuary and the Fellowship Hall, will be in use. Due to limited finances, the interior of the second story will be finished at a later date, after the main part of the church opens.

Architect Kimberly Barnett elaborated that the exterior design will be that of a classic New England church, with traditional clapboard siding.

Landscape architect Naomi Cottrell talked about adding new canopy trees along the perimeter of the property as well as a “main entry garden” at the church’s primary entrance.

Engineer John Ogren talked about some of the civil aspects of the project including parking and drainage.

Phase 2 completion, pending available funds, will include site enhancements (additional trees, site sign, playground). Phase 2 will also include interior finishes on the second floor, which will house a nursery school and Sunday School classrooms as well as meeting rooms.

The original church was long the home of the Tall Spire Nursery School, and the goal is to bring back the nursery school use at some point.

“I don’t see a lot to debate here,” ZBA member Chip Tarbell said after hearing the legal arguments and the building plans. “They should be allowed to replace a church that burned down.”

The board agreed that the church should be allowed to rebuild and that the new church, as planned, would be substantially less non-conforming than the original, larger church.

The board also granted a Special Permit allowing a future daycare use in the church.

It was noted that the original church bell, recovered from the fire, will be incorporated on the site, likely next to a future exterior sign for the church.

The original First Baptist Church, a stately house of worship for generations, home to a nursery school educating hundreds of children over the years and an important part of a classic New England downtown, was destroyed on Oct. 23, 2018 in a massive fire set off by a lightning strike.

Fire Chief Michael Sullivan said at the time that a thunder storm came through town at about 7 p.m., and immediately on the heels of a couple of lightning strikes, the Fire Department started receiving calls reporting that the church had been hit. Shortly thereafter, the church’s fire alarm system went off and sent a signal to the fire station.

Sullivan said that that the first arriving Wakefield crew, led by Captain Paul Pronco, could see flames near the base of the steeple. They immediately started hitting that area with water and were preparing to bring a hose inside the church when the fire suddenly raced up the entire height of the 180-foot steeple. Captain Pronco quickly sounded a second alarm and then a third, in what ultimately became a seven-alarm fire.

Sullivan said that once a steeple is involved, it is very hard to control a church fire. Older churches such as the First Baptist Church tend to have multiple ceilings including decorative false ceilings with voids between the ceilings and the roof. Once the fire gets into that space, Sullivan said, a fire can easily gain a lot of headway before firefighters can even see it or get at it.

“There was just no stopping it once it got into that concealed ceiling space,” he said.

Sullivan said that there were three or four hours of active burning before firefighters were able to get the fire under control, and they remained there all night and into this morning fighting hot spots.

Sullivan called the church “a total loss. I don’t see how any part of the church could be saved.” He estimated the damage at at least $1 million.

The church was not equipped with a sprinkler system, Sullivan said, noting that there had been no significant construction at the church in recent years that would have triggered the requirement to install sprinklers. Had there been sprinklers, Sullivan said, it might have slowed the flames somewhat but it still would have been a major fire due to the age of the church. Most churches in Wakefield do have sprinkler systems, he said.

Firefighters used over 15 hydrants in the downtown area, Yale Avenue, Church Street and North Avenue. The DPW boosted water pressure to the area to help get more water on the fire. More than 100 firefighters dumped several million gallons of water onto the fire.

There were no civilian casualties, although several firefighters did sustain minor bumps and scrapes in the course of fighting the blaze. There was a group meeting in the church at the time the fire broke out, but all exited the building prior to firefighters’ arrival.

Sullivan said that Captain Paul Pronco and his first-arriving crew did the everything they could do, given what they encountered. He added that the mutual aid system once again proved its worth, noting that there was no way that a fire department in a town the size of Wakefield could have fought such a fire on its own.

Flames crackled and early on burning embers were sent at least 200 feet up into the night sky. Smoke from the intense fire could be seen from nearby communities.

On Yale Avenue, people coming from a wake at the McDonald Funeral Home dodged burning pieces coming from the church. Other properties were also rained down upon by glowing ash.

Hundreds of on-lookers crowded onto Main Street in the Square, Common Street and Lafayette Street to watch the firefight and lament the loss of an iconic, century and a half old structure.

The church was also home to the Tall Spire Nursery School, where hundreds of children began their education over the years.

Police officers worked with the DPW to get streets blocked off in order to allow firefighters to do their job. Several other communities sent cruisers to help local police with what became a major traffic operation.

Prior to the Baptist Church fire, the last church fire in Wakefield was the one that destroyed the old St. Joseph church in 1977.