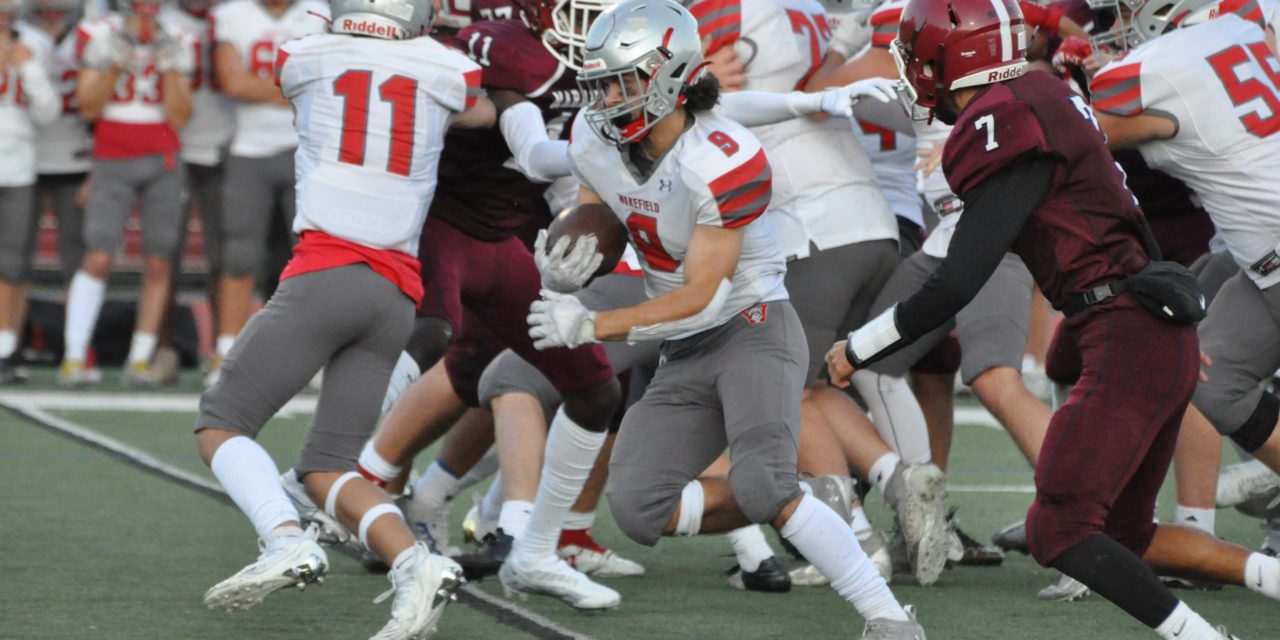 BOBBY DEFEO cuts up field for his first of three rushing touchdowns against Belmont on Thursday night. The senior rushed for 164 yards on nine carries, an average of 18.2 yards per carry, and now leads the Warriors with four touchdowns in their first two games. (Brian Cusack Photo)

BELMONT — The Wakefield High football team jumped on the back of seniors Bobby DeFeo and Nathan Delgado on their way to a 36-12 win over a Middlesex League Liberty Division opponent on Thursday night in Belmont.

DeFeo had three rushing touchdowns and 164 rushing yards on just nine carries, a yards per carry average of 18.2.

Delgado rushed for 123 yards on 20 carries and added two touchdowns.

The Warrior defense, with Delgado and DeFeo patrolling the secondary, came up big when needed to keep the Marauders off the board in the first half as they went to the locker room up 14-0.

“It was a good, team win against a quality opponent,” said Wakefield head coach John Rafferty. “Belmont is a talented and well-coached team who will win some games this year. We executed well, but certainly not flawlessly.”

One of those rare blemishes came on Belmont’s only score of the third quarter, a 75-yard pass from Jayden Arno to Brian Logan, the one key mistake made by the Wakefield defense according to Rafferty who was happy overall with Wakefield’s ability to keep a dangerous group of Belmont playmakers from finding the end zone.

That play made it 22-6 but DeFeo raced in for a 39-yard score to all but seal it going into the 4th quarter where the senior running back picked up his third on a 13-yard carry. His first was a 28-yard run that opened the scoring.

It was a breakout game for DeFeo who now leads the Warriors in touchdowns with four through the first two games.

“Bobby has really grown into being a football player,” said Rafferty about the three-sport athlete. “He has matured as a player and especially as a running back, following his blocks and running hard. He had a very productive night.”

The first quarter was somehow scoreless even with both offenses moving the ball well.

Wakefield started the scoring in the second quarter on an 80-yard drive that was capped by DeFeo’s 28-yard scamper.

After the defense forced a three-and-out, quarterback Javin Willis went back to work mixing in three pass to Christian Delgado while Nathan Delgado had multiple strong runs to put the Warrior in range. Nathan Delgado’s 27-yard TD made it 12-0 and Willis found Ian Dixon for the two-point conversion to make it 14-0.

As the Warrior defense followed a bend don’t break policy to keep the home team scoreless late in the half, their offense kept humming along to start the second half, scoring on their first possession when Nathan Delgado dove in from 3 yards out and followed that by running in the two-pointer for good measure to stake his squad to a 22-0 advantage.

DeFeo’s second touchdown, the longest of the night for Wakefield and coming after an onside kick attempt, served as the knockout punch for a Warrior team who has now outscored their first two opponents by a combined count of 64-18.

The Warriors have been focused on good practice habits and hard work in preparation for games. It’s not dissimilar to any other team, but Wakefield knows that they can accomplish as much as they are willing to work for everyday, as a group.

“That’s the mantra, ‘you get what you work for,’” said Rafferty. “We’re going to keep riding that, one week at a time.”

As for this week, Wakefield will put in the work to get ready for 1-1 Northeast Metro Tech, who topped Saugus 40-12 on Saturday. The Golden Knights gave last year’s D5 Super Bowl contestant North Reading a game in their season opener, which the Hornets won 35-20.

Wakefield and Northeast will meet this Friday, 6 p.m. at Landrigan Field.