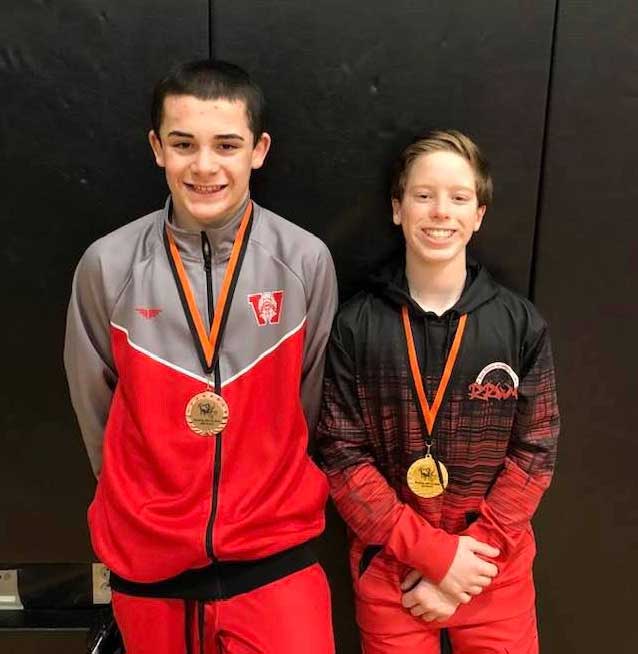 WAKEFIELD WARRIORS Zach Arria (left) and Andrew Valley helped the Warriors go 3-1 in a super quad meet on Saturday. Valley went 3-0 and Arria went 2-1 in the meet. They both earned pins in a win over Burlington yesterday. (Courtesy Photo)

Brawl in the Hall returns next week

WAKEFIELD — The Wakefield High wrestling team continued their strong season by going 3-1 at a super quad meet they hosted on Saturday. The Warriors went on to earn victories in two league dual meets this week, first on the road against Watertown on Monday, then at home against Burlington on Wednesday.

Wakefield hosted Wilmington, Pentucket and Tyngsborough on Saturday at the Charbonneau Field House. The Warriors beat Wilmington 55-12, toppled Pentucket 39-15 and fell to Tyngsborough 55-21.

The Warriors went 7-2 in contested matches against Wilmington. Andrew Valley had a 12-1 major decision at 126 to earn 4 points.

The results were similar for Wakefield against Pentucket, going 5-3 in contested bouts while also picking up multiple forfeits.

The Warriors then got a great test against a talented Tyngsborough team. The Tigers went 9-4 in contested bouts and picked up an extra six points on a forfeit at 106 to earn a 55-21 win.

On Monday, Wakefield traveled to Watertown where they beat their Freedom Division opponents by a 53-21 count.

Wakefield went 10-4 against the Raiders. Nine of their victories came via pin.

The Warriors continued to be locked in when they returned home for another divisional tilt with Burlington yesterday.

Wakefield went 5-2 in contested bouts and picked up a few forfeits on their way to a 51-18 victory.

The rest of Wakefield victories were hard-earned.

Wakefield’s super quad meet scheduled for this Saturday morning at Wayland High was cancelled due to the impending snowstorm.

The annual “Brawl in the Hall” between rivals Wakefield and Melrose will return to Memorial Hall this season. The big matchup is scheduled for Wednesday, Feb. 2. Doors open at 6 p.m. and the action starts at 7 p.m.

The Warriors will hope for a repeat of the past on Groundhog Day as they look to win their third straight matchup against Melrose and their third consecutive Freedom Division crown.