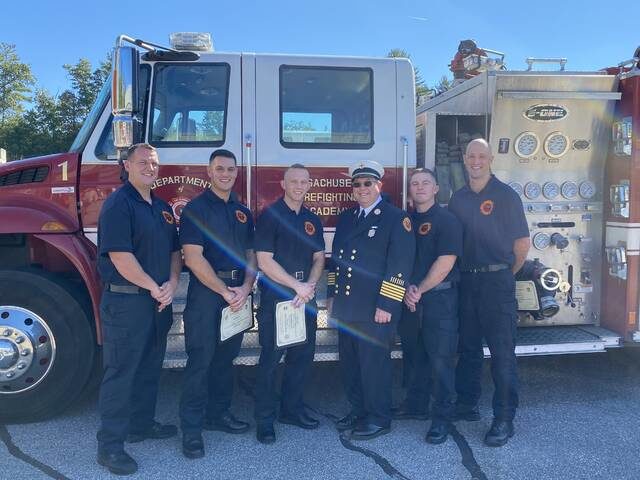 An additional honor was bestowed on Firefighter Samuel Carr as he was announced the recipient of the Richard N. Bangs Award, which is given to the outstanding student of MFA Recruit Class 295. In each class there is one student selected who has excelled in the training program and this student is named as the outstanding student of the class. This award was competitive and was based on Firefighter Carr’s achievements in both academic exams and practical skills.

The Master of Ceremonies for the graduation was MFA Recruit Program Assistant Coordinator Jack Gelinas. Massachusetts Deputy Fire Marshal Maribel Fournier made some brief remarks, stating, “This rigorous professional training provides our newest firefighters with the basic skills to perform their jobs effectively and safely.” The Massachusetts Firefighting Academy (MFA), a division of the Department of Fire Services, offers this training program to cities and towns tuition free.

Today’s firefighters do far more than fight fires. They are the first ones called to respond to chemical and environmental emergencies, ranging from the suspected presence of carbon monoxide to a gas leak. They may be called to rescue a child who has fallen through the ice or who has locked himself in a bathroom. They rescue people from stalled elevators and those who are trapped in vehicle crashes. They test and maintain their equipment including self-contained breathing apparatus (SCBA), hydrants, hoses, power tools and apparatus.

At the Massachusetts Firefighting Academy they learn all these skills and more from certified fire instructors who are also experienced firefighters. Students learn all the basic skills they need to respond to fires and to contain and control them. They are also given training in public fire education, hazardous materials incident mitigation, flammable liquids, stress management, confined space rescue techniques, and rappelling. The intensive, ten-week program for municipal firefighters involves classroom instruction, physical fitness training, firefighter skills training and live fire training.

Upon successful completion of the recruit program all students have met national guidelines set forth by the National Fire Protection Association Standard 1001, obtaining certification to the level of Firefighter I and II. Recruits also graduate with an additional certification as Hazardous Materials First Responder Operational Level as established by the Massachusetts Fire Training Council, which is accredited by the National Board on Fire Service Professional Qualifications.

Chief Sullivan had strong praise for the Massachusetts Firefighting Academy Recruit Training Program, stating that the training “was something that we simply can’t duplicate and provide at the local level. We welcome Firefighters Bruno, Carr, Curran, Fitzpatrick and Panzini back from the Fire Academy and wish them a long and productive career in the fire service serving the citizens of Wakefield.”