BURLINGTON — Every year, every season, the Burlington Red Devils are the Wakefield High boys’ cross country team’s toughest challenge and the biggest obstacle in the way of a Freedom Division Championship.

Tuesday afternoon was no different as Burlingon had three strong runners up front. However, the Warriors top 5 was too strong and they were able to escape with a 27-28 victory to make the possibility of the Warriors winning their 6th consecutive Freedom Division Title even more possible with two meets to go.

Senior captain Mike Roberto was outstanding on Burlington’s 5K course as he ran stride for stride with the Red Devils’ top runner only to break away over the last few hundred meters and lead the Warriors to a victory with a time of 15:38. The Red Devils didn’t make it easy as they placed 2nd, 3rd and 4th. Fortunately, five runners are needed to win a meet and Wakefield followed with a 5th place finish by senior captain Ajay Haridasse who ran 16:34. Junior Leith Jones was 6th in 16:44. Junior Ben Stratton was 7th in 16:45. Senior captain Thomas Dowd closed out the victory placing 8th in 16:56. 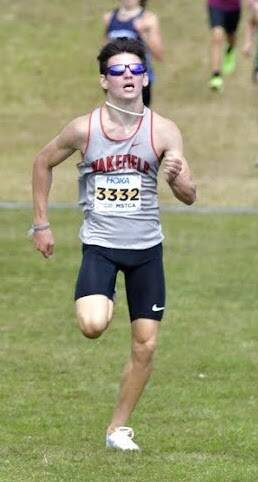 MICHAEL ROBERTO earned a 1st overall finish in Burlington on Tuesday with a time of 15:38. (File Photo)

“I’m proud of how the boys competed today,” said head coach Perry Pappas. “It was obvious from the start of the season that they had this meet as a priority on their schedule. The focus has only gotten stronger as we saw how strong Burlington’s top three were in recent weeks. We look forward to facing them again at the League Championship and State Championship meets next month.”

The next meet is this weekend’s MSTCA Twilight Invitational on Cape Cod followed by Watertown on Tuesday.