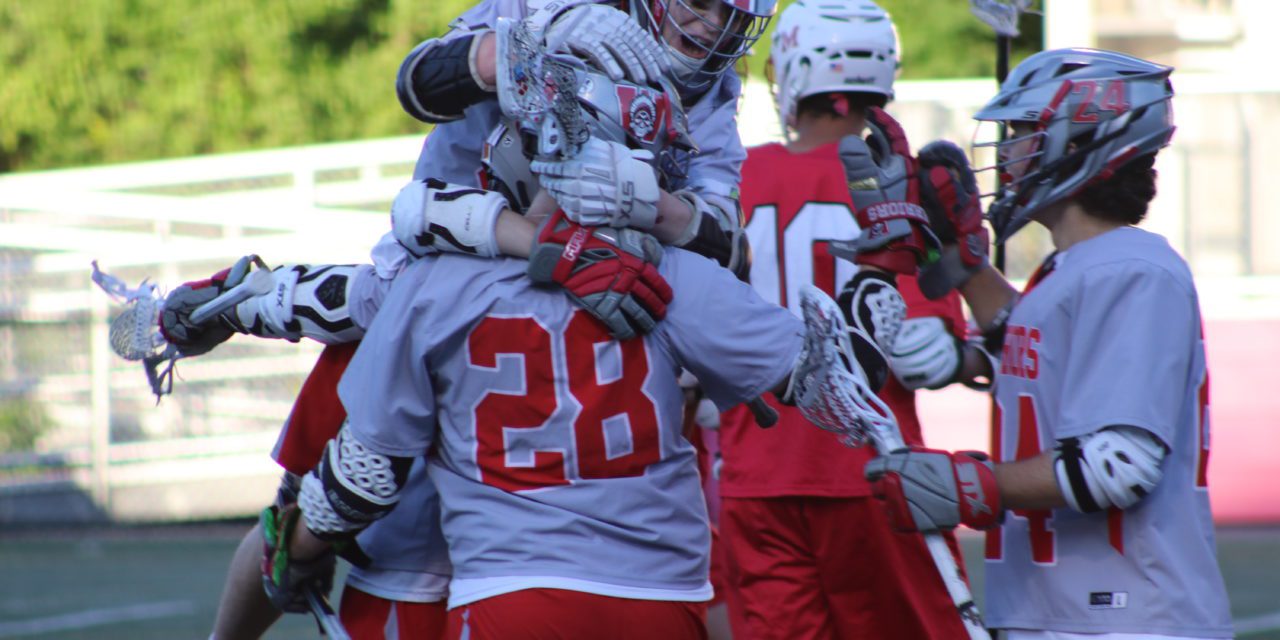 Warriors move on 13-10; travel to No. 1 Longmeadow tomorrow

WAKEFIELD — There are 34 teams in the inaugural statewide Div. 2 boys’ lacrosse tournament.

There were new rivalries born and road trips aplenty throughout the majority of the first round: Masconomet came up short at Silver Lake; Danvers got a glimpse of Nashoba and fell 13-6; Burlington ran into a Nauset buzz saw on the road; Leominster didn’t enjoy their trip to Billerica same as Hopkinton to Marblehead.

Meanwhile at Landrigan Field under the lights last night, a rivalry, ancient and authentic, was getting a new chapter.

This one, belonged to the Warriors.

Wakefield, trailing 6-5 in the 3rd quarter, went on a relentless 8-1 run and pulled away in a game that typically comes to down to the very last minute – like it did in a 9-8 OT win for Wakefield in the regular season.

The Red Raiders closed strong with the final three goals to account for a 13-10 final but the fates were already decided. Wakefield was moving on, finally to an unfamiliar opponent in No. 1 seed Longmeadow, who they will play in the Round of 16 tomorrow, 5:30 p.m. at Longmeadow High.

“It’s always fun playing Melrose,” said Wakefield head coach Tim Johnson. “Don’t get me wrong, it’s stressful; we know they’re well-coached and they’re a good, gritty team. We can’t go into any game with them and think its an easy run. You think you’re getting momentum and then they claw back in, it’s just always a back-and-forth game.

“When you think about rivalries and good lacrosse games this is right up there as one of the best in the state.” 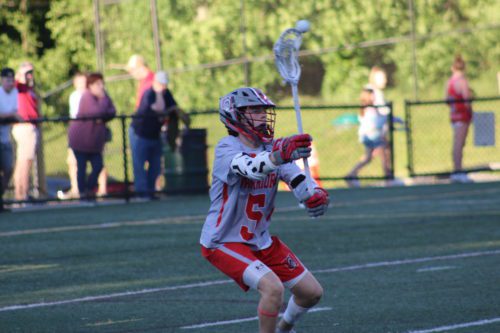 Junior goalie Kaiden Johnson racked up 8 saves and Wakefield’s defense stepped up in the biggest of moments, like when junior Ethan Margolis picked off a pass with Melrose on a man-up for two minutes, locked in, trying to cut down on a 10-7 Warrior lead. That led to a dagger of a Colliton goal.

As it starts every lacrosse game, the story of this one could be simplified to the face-off X where DeFeo was teaching a Masterclass of determination, leverage and stick skills. He won 18 of his 26 face-offs, always when it felt like his team needed it most.

“Having a face-off guy who can control the tempo and create offense out of those is tremendous,” said Johnson. “That kind of transition right from the face-off is hard for teams to defend. Its happened to us throughout the season, its a stake to the heart.”

Those 50/50 victories were the deciding factor as Wakefield settled into the 3rd quarter and reclaimed the lead. DeFeo stayed hungry at the X and Regan scored two of those quick-hitter goals right in front of his Red Sea to start the 4th quarter as the decibel levels ramped up at Landrigan – the home fans sensing that their team was on the fast track to victory.

“The fan support, you can’t ask for more,” said Johnson. “They’re always into it and especially the Red Sea, they know the guys on the team as classmates and friends so it’s great to have that here.”

It was Regan who struck first for Wakefield off one of multiple, heady, unselfish passes from Foley to tie the game at 1-1. Dubiel’s first was a patient shot after taking space and Wakefield went up 3-1 when DeFeo went for goal with the Red Raiders daring him to shoot from distance. Melrose cut it to 3-2 and Johnson kept his team in front to end the frame with a fearless stop on a blistering, high shot.

Wakefield made it 5-2 with two goals in seven seconds early in the 2nd quarter, the first from Regan and the next being Colliton’s initial tally.

Melrose finished the half strong with two goals to make it 5-4 Wakefield at the break.

The tug-of-war nature of this rivalry meant that nobody was surprised to see the Red Raiders fight back in the second half, getting two more (four in a row now) to take a 6-5 lead.

Dubiel, who missed the regular season matchup against his rivals, settled his team when he got a one-on-one dodge, cleanly beat his man and gave the goalie no chance on a point-blank shot. A calm and professional goal celebration signaled to his teammates that there was plenty of work to be done.

Colliton’s second came on a “Tatum-like” jump shot fading away from the cage and just as Melrose made a great defensive play, senior Jonathan Guida responded with an interception in the D zone.

The Warriors scored man-up, Mailhoit to Dubiel to make it 8-6 after three.

Regan’s back-to-back goals in the 4th signaled that the Warriors have the depth to compete with the best.

“Jake creates problems for teams, he’s a really talented player,” said Johnson when asked about the difference of Dubiel between this game and the regular season contest. “But when you decide you want to match up a certain way on Jake, someone like Joey (O’Brien) can hurt you or Bobby (DeFeo).

“Regan was lights out, he erupted. We need those guys to step up and have big games in these moments. It was Regan’s night, he made things happen in unsettled situations.”

As the hometown fans celebrated a hard-earned victory, the Warriors were already thinking about their next opponent.

Longmeadow, who finished the regular season at 17-1 to earn the top seed, beat No. 32 West Springfield 18-6 in the first round. The Lancers were Div. 2 runners-up last year, falling to Concord Carlisle 11-10 in the championship. The team consistently wins in the state tournament and has multiple sectional titles to their name. Wakefield knows they will have to bring their best.

“I believe we can play with anybody if we limit our mistakes, capitalize on theirs and play a good, smart, 48-minute lacrosse game,” said Johnson. “We know we’re heading out to a powerhouse so we’ll get ready and do our best.

“We’ll end up where we end up but I don’t want to leave a field feeling any regrets saying we could have or we should have. Sell out, leave it on the field and accept where you go from there.”