Ryan passed away at the age of 18 on May 9, 2016 after being diagnosed with bacterial meningitis. The Ryan Shaw Memorial 5K run/walk aims to preserve Ryan’s legacy through this memorial event. 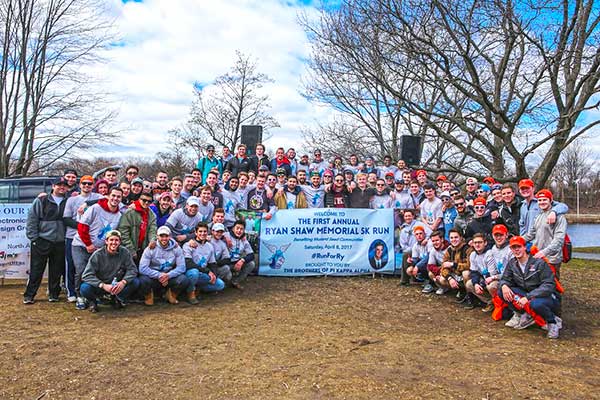 THE FIRST Ryan Shaw Memorial 5K was a huge success last year, raising over $47,000 in charitable donations, sponsorships, and registration fees for Mustard Seed Communities, an international nonprofit organization in which Ryan Shaw was actively involved in during his life. The second annual Ryan Shaw Memorial 5K will take place on Saturday, April 21. (www.ryanshaw5k.org)

To register for the race log on to www.ryanshaw5k.org. Participants who register by April 2, will receive a complimentary event t-shirt. Registrations close Tuesday, April 17 at 11:59 p.m. Participants of all ages and abilities are welcome to take part in the race.

Information on how to sponsor the race or to donate directly to the Ryan Shaw Foundation can also be found on www.ryanshaw5k.org.

Shaw had recently completed his freshman year at Northeastern University, where he was studying for a bachelor’s degree in Finance. While only in his first year of school, Ryan had the opportunity to study abroad in Dublin, Ireland during the Fall 2015 semester. Ryan made the most of his time abroad, traveling to various European countries and building close friendships along the way. Upon his return to Boston, Ryan was quick to involve himself in the Northeastern community, joining a fraternity and taking advantage of all that the city had to offer.

Prior to Northeastern, Ryan attended St. John’s Prep in Danvers, MA, where he thrived academically and started his own business, called EquityOwl, with two close friends. Ryan’s creativity found expression in the art studios at St. John’s, where his painting of a sailboat on calm waters won a Boston Globe Scholastic Art Gold Medal Award and was even temporarily displayed in the Museum of Fine Arts in Boston. He was also a talented athlete, playing Wakefield travel soccer, little league baseball, and basketball throughout his childhood. He used his unique charisma, humor, and natural drive to always pull the most out of people. Ryan avidly sought out adventure and welcomed competition, whether traveling with friends, hitting the ski slopes during the winter months, or spending time down the Cape with family and friends. Ryan’s list of accomplishments in just 18 years is truly remarkable.

The 2018 Ryan Shaw Memorial 5K Run benefiting The Ryan Shaw Foundation is being held in honor of Ryan and to preserve his beautiful legacy. He is dearly missed by all his family and friends.

All participants will be timed via chip-technology through RaceMenu. Dogs and strollers are welcome at the event, however we ask that those running or walking with a dog or stroller position themselves towards the back of the starting line for safety purposes. We encourage those not running or walking in the event to come out and support their friends and families at the finish line.

The event will include DJ-style music before and during the race, with a live musical performance by local artist Dylan Rockoff and James Serra following the race. There will be a 50-50 raffle, light food/drinks, snacks and giveaways from sponsors as well as medals for the top three male and female participants.