Wakefield selectman for 12 years, Planning Board member for 6 years 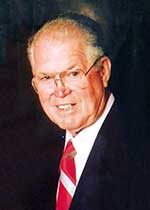 Born in Lowell on May 17, 1926 and was the son of the late Lawrence P. and Margaret E. (McSherry) McCluskey.

Larry was raised in Billerica and was a graduate of Howe High School, Class of 1944. After graduating high school, Larry enlisted in the Navy and reported to Harvard under war plans where he spent two years before relocating to the Naval Air Base in Brooklyn, N.Y., and ultimately ending up in Chapel Hill, N.C. Following an honorable discharge from the Navy, Larry went on to receive his bachelor’s degree from Northeastern University. Larry began his career with Bethlehem Steel. He was also involved in the Big Dig, where his work involved railroads, bridges, and buildings. He retired as a Sr. Vice President of Seelye Stevenson Valve and Knecht Engineering Co. After his retirement he taught as a Professor at UMASS Lowell from 1992 to 2000.

Larry was a member of the Knights of Columbus, the American Legion, the Holy Name Society, the Wakefield Chorus, and St. Joseph Parish. He also served on the Wakefield Board of Selectmen for 12 years and the town Planning Board for six years. In his spare time, Larry loved to camp all across the country. In his retirement years, Larry loved to travel to Europe, Iceland, and many other places. He enjoyed much of his time in Hilton Head, N.C.

Visitation for relatives and friends will be held at the McDonald Funeral Home, 19 Yale Ave., Wakefield on Thursday from 4-8 p.m. His funeral will be held from the funeral home on Friday beginning at 11:30 a.m., followed by funeral Mass in St. Joseph Church, 173 Albion St., Wakefield at 12:30 p.m. Interment, Forest Glade Cemetery, Wakefield.