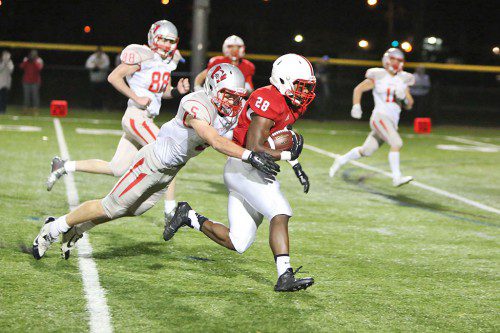 THERE WAS no stopping Melrose running back Jay Tyler, who helped the Red Raider football team defeat Wakefield, 21-0 last Friday night in opening round playoff action. Tonight, Melrose will host Wayland at 7:00 p.m.

MELROSE — It was, at times, downright scary but still a convincing win for the Melrose High School Red Raider football team, who shut out Wakefield 21-0 at home last Friday night in the opening round of the Div. 3 Northwest playoffs, their fifth consecutive victory against the Warriors. Melrose remains undefeated at 8-0 and advances to host Wayland in Northwest semifinal play tonight at 7 p.m. at Fred Green Field in Melrose.

Mike Pedrini led Melrose on offense (130 yards on 23 carries, 2 TD) picking up his 14th touchdown of the season while Melrose quarterback Julian Nyland tossed one touchdown (5-17 in passing with 75 yards) and ran for 46 yards.

And while it was Wakefield’s fifth straight loss to Melrose, it was the first for new Warrior football coach Steve Cummings, who had a few weapons in his arsenal, including tough defensemen Zack Kane and Tighe Beck, who limited Melrose’s offense to 250 rushing yards, mostly behind Pedrini and Melrose senior running back Jay Tyler (72 yards, 10 carries).

“It was a good effort,” said Melrose Coach Tim Morris after the game. “The offense got going. They [Wakefield] stopped some drives that we would have had going with some penalties and mistakes but I thought for the most part the offense really played well and defense too.”

A key component in the win was Pedrini, who seems back at full capacity after briefly sidelined from a concussion earlier in the season. “Mike makes a big difference when he’s healthy,” said Morris. “He’s playing well on both sides of the ball.”

However, it was an uncharacteristically sloppy game for Melrose, who gave up 40 yards in penalties and turned the ball over three times (a fumble and two pickoffs). Wakefield failed to take advantage of those turnovers, coming as close as the 16 yard line in a sole red zone appearance over the night. Their greatest threat in scoring was a first and 10 on Melrose’s 16 yard line very late in the third but that was thwarted by Melrose senior captain Cam Hickey who delivered two consecutive sacks to kill the drive. Overall, the Warriors generated a sparse amount of offense behind efforts of quarterback Ned Buckley (4-17 in passing, 80 yards) who struggled against a tough Raider defense, who limited Wakefield’s total offense to just 86 yards.

Melrose quarterback Julian Nyland set the tone in the opening possession, with a well-executed fake that resulted in a 53 yard touchdown sprint. Having faked out the refs too, the play was called back on an inadvertent whistle against Melrose. “Julian threw the ball well and made some good reads on the option,” Morris said. “So much so that one of the refs thought we gave them the ball when he kept it.”

The result was a drive that went south for Melrose after a face mask penalty and fumble. The Warriors took over the ball but their drive died thanks to tackles from Melrose’s Colin Casey and Jared Botelho. The Red Raiders were first on the board when Pedrini ran for a 15 yard TD with 4:33 left in the first and a good Mike Cusolito kick gave Melrose the 7-0 lead. Raider defense worked hard to contain Warrior running back Paul McGunigle, but Brian Mercer and Cam Hickey came up with key tackles to limit him. As halftime approached Melrose scored once more after a series of passes to Alex Burton and rushes by Pedrini brought Melrose to the Warrior 35. From there, Nyland connected with Ryan Censullo to make it a 14-0 contest. It remained that score until halftime. Melrose scored another touchdown in the third, albeit in an unpredictable way. Despite two false start calls against them and a recovered fumble, Melrose still found the end zone thanks to a 17-yard touchdown run by Pedrini (his second of the game). This gave Melrose a 21-0 lead they would not lose.

After the game, coach Morris noted Melrose-Wakefield contests are always different no matter how many times they face each other a season.

“We were familiar with them but it is a little different with the new coaching staff,” Morris said. “They do some things a little differently but they’re always tough and always play good defense. They have some good skilled players, especially Tighe Beck. He’s a real good receiver but I thought we did a good job on him.”

With the win Melrose remains undefeated (one of only a dozen in the state currently) and advance to Div. 3 Northwest semifinal play tonight against Wayland at home, hoping to extend their winning streak to nine and make their way to their third consecutive Div. 3 Northwest Final.