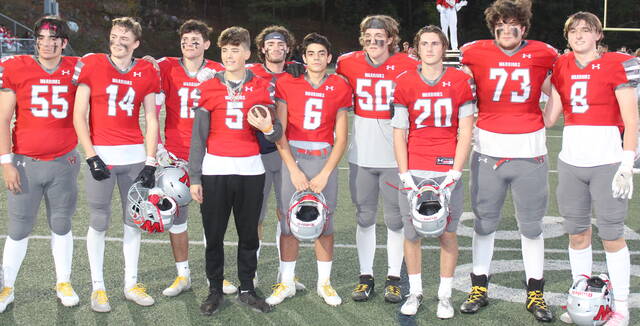 WAKEFIELD — In the blink of an eye, it was over.

The Wakefield High football team spent an entire second half battling back from a 14-0 halftime deficit against Watertown on Friday night at Landrigan Field. That effort led to overtime, where the offense responded to Watertown’s 1-yd TD with a 2-yd QB sneak by Javin Willis (15-for-23, 200 yards, 2 passing TD’s, 1 rushing TD) to make it 22-20. Willis rolled out on the ensuing two-point conversion, not dissimilar to the successful 2-point throw to Ian Dixon (6 catches, 116 yards, 1 TD) that tied it up at 14 with two minutes left in the 4th. This time, however, the Raider defense batted down the throw, bringing an end to the game with a thud and a heartbreaking loss for the hometown Warriors.

“We did not play well in the first half. We made too many costly mistakes and they were able to capitalize,” said Wakefield head coach John Rafferty. “The kids were very resilient in the second half, they stayed in it, we just came up a little short.”

The loss sent the Warriors to 4-2 while Watertown improved to 4-3.

Wakefield’s first half mistakes included a bad snap on their strong first drive that gave Watertown the ball around midfield leading to the Raiders’ first TD, a 14-yard run by Mason Andrade; an offside penalty on a punt during Watertown’s second possession, turning a 4th-and-7 into a 4th-and-2 which the Raiders then converted and a breakdown in coverage on a 4th-and-4 that resulted in a 29 yard pass and catch down to the 1 that ended in a a 1-yd TD dive by Payton Andrade.

Both defenses forced a turnover-on-downs bringing an end to a quick first half that Wakefield would try their best to forget.

The Raiders came out of the locker room looking for more, driving 57 yards in a grinding seven minutes all the way to Wakefield’s 13-yard line in what looked like a surefire three-score lead. That’s where Dixon and Steven Woish (5 catches, 50 yards, 1 TD), Wakefield’s two most dangerous offensive weapons in this one made a key play on defense, standing up Mason Andrade and stripping the ball. Who exactly recovered it in the scrum is a good question. Nathan Delgado is our best guess.

What was certain for the Warriors was not only a new possession but new momentum and new life – exactly the thing their offense needed. Wakefield put together a nine-play, 93-yard, 5:05 long drive that ended in the most electrifying sequence of the night, a 46-yard TD pass from Willis to Dixon.

The imposing All-Star lineman turned tight end this season, ran a corner route toward the Warrior sideline. Willis put it where only his classmate could reach, a jump ball that Dixon came down with, somehow staying in-bounds, rumbling down the sideline and tight roping his way across the goal line, sending the bench and the Red Sea student section into a frenzy.

“It was the most touches he’s had this year, he did a nice job,” said Rafferty of Dixon. “Javin had some pretty great throws to him too. That touchdown was huge for us.”

The Raiders blocked the point after attempt to make it 14-6 going into the final quarter.

Wakefield’s defense forced a punt on Watertown’s next drive thanks in large part to a nice tackle by Nathan Aliberti on a first down run, and good coverage from Christian Delgado on 3rd-and-9 from midfield.

The Warriors took over on their own 33 with 10 minutes remaining. Watertown’s defense made Wakefield earn it, forcing four 3rd downs and a 4th down, but the locals’ best drive of the season finally resulted in six, seven minutes and 26 seconds later when Willis hit Woish for an 8-yard TD and then followed up by finding Dixon for the two-pointer and the tie.

Leo Yardumian (15 carries, 67 yards) kept the chains moving on a 3rd-and-2 from their own 41. Willis connected with Dixon twice on the drive, the second being a 22-yard pass-and-catch on 3rd-and-9 from the Raider 42.

As the Warriors scratched and clawed for rushing yards, the Raiders’ big and strong front seven was up to the task eventually forcing a 4th-and-7 from the 17. Willis dropped back to pass and didn’t find any open receivers so he took off down the right sideline; about four yards later, the junior QB made a decision with a linebacker screaming towards him. In a spot where most would step out and give up, Willis hurdled the defender, getting clipped as he was launched upward. A full flip later, the agile signal caller stuck the landing for a 10-yard run and calmly trotted to the new line of scrimmage to call a first down play.

“I told him after the game, ‘I’m just happy you didn’t land on your head kid,’” said Rafferty. “He decided that he was going to do whatever he could to keep that drive going – it was a great effort.”

After Watertown made it tough again on two straight run attempts, Willis went back to the air, finding Woish for the score.

The overtime rules in high school gives both teams a chance on a 1st-and-goal from the 10-yard line. Watertown, who went first, faced yet another 4th down, this time from the 1-yard line but Payton Andrade punched it in for his second of the day. Kaio DaSilva rolled out and ran in the two-point conversion.

Willis responded with a 5-yard carry and later punched in a QB sneak from 2-yards out before Watertown’s defense finally ended it.

It’s a game that will also likely have big implications on Wakefield’s playoff chances. The Warriors were ranked 16th in Div. 3, the last team in for the MIAA’s latest power rankings last week. Although Watertown is a projected playoff team (13th in D5) the Warriors will likely need to beat Wilmington (4-3, 9th in D4) on the road this Friday at 6 p.m. to give themselves a chance.

“We hadn’t even talked about it as a staff until last week when somebody brought it up,” said Rafferty. “I don’t look at that stuff. Since we have been here (in 2018), it’s been week-to-week, game-to-game. We take it one game at a time. You only get one shot at it on game day so you have to make the most of your opportunities. When you fall short, you have to correct your mistakes, get better at what you do and get ready for the next one.”