Warrior volleyball run ends in Round of 16 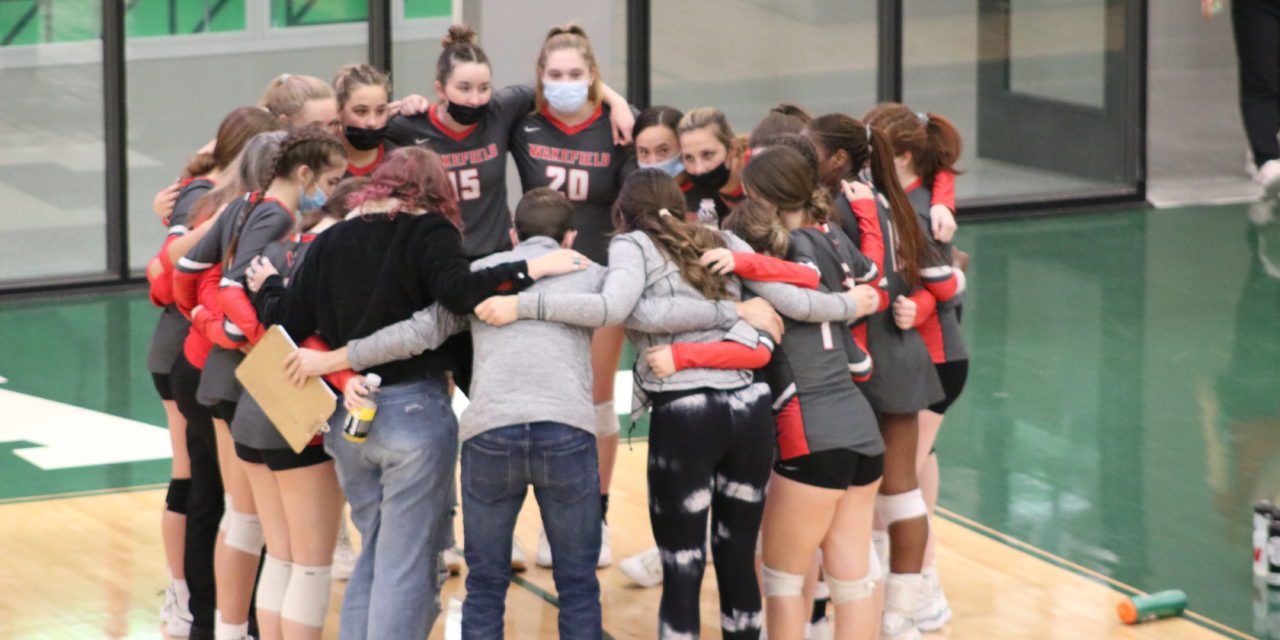 BILLERICA — The best season in Wakefield volleyball history came to end on Monday night in Billerica as the 20th-seeded Warriors fell to the 4th-seeded Indians 3-0 in Division 2’s Round of 16.

“I told them, I know it’s disappointing and in a perfect world it would have been great to go to the finals and win your last game but the positive side is, we can leave here tonight knowing that as we say, ‘all out, all game, all season,’ we did that. We did that every game,” said Wakefield head coach Kayla Wyland.

Promising to go all out is made easier when you’re ahead. The Warriors still stuck to their team values when it was much more difficult to do so, against a great team, on the road, in just the second state tournament game in program history.

Building off their first tourney victory the previous week, Wakefield jumped out to a strong start in set one, at one point leading 7-3, before Billerica shook off the rust and came back to win the set 25-23. The home team went on to win set two, 25-17 and set three, 25-13.

The Warriors were led by senior captain Mia Desruisseaux who tallied 10 kills and 18 digs.

“Mia’s been such a solid player for us – I can put her anywhere,” said Wyland. “Her hitting and her defense is absolutely incredible and she’s so consistent. I’m so happy to have had her and definitely sad to lose her next year.” 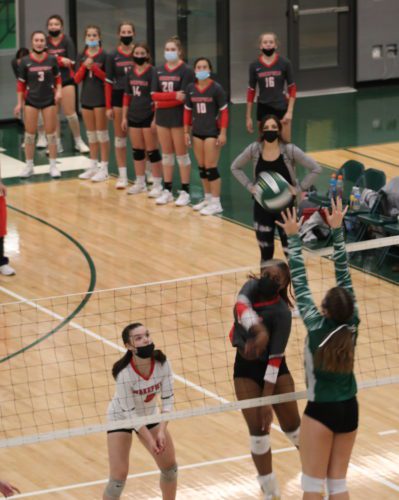 CAPTAIN MIA DESRUISSEAUX follows through on one of her 10 kills while captain Amanda Nett (9), head coach Kayla Wyland and the Warrior bench looks on. (Dan Pawlowski Photo)

That’s a sentiment that the coach feels for the entire class of 2022, a group that has helped bring Wakefield volleyball to new heights this season. As evidenced by their first tournament appearance and victory, along with their first win over a strong Burlington team (twice) this year, the seniors, including captains Desruisseaux, Amanda Nett and Maddy Seabury, Talia Thomson, Haley Ogier, Hannah Kelley and Claire Donahue, have certainly set the tone for future teams.

“The seniors, we have been playing together for a really long time so it’s pretty sad this is our last game but I think this team is going to continue to grow so much,” said Desruisseaux.

“My first season (last year’s Fall 2), for a lot of them, it was their first year on varsity and they absolutely decided to go all out,” said Wyland. “They wanted to be successful and work hard for each other, for the team, for Wakefield.”

Wakefield’s strong start echoed across Billerica’s brand new gym as the visitors got a chance to play in front of a much bigger Warrior crowd with at least a shorter drive west than their round one game in Milford.

Seabury’s first of five kills gave Wakefield a 2-1 lead and junior Christa Imbriano’s first of two aces made it 3-1. A Desruisseaux spike from the outside pushed it to 4-1 as the Warriors continued to put the pressure on.

Billerica went on their first of a few runs to turn a 7-3 deficit into a 7-7 game. Wakefield kept battling back, not relinquishing the lead until Billerica went up 12-11.

Another Seabury kill from the middle off a great setup from Donahue later got the lead back at 14-13 but Billerica found another gear with a 9-0 run to take control of the set. Three Desruisseaux kills got Wakefield back into it but the home team continued to play solid defense on their way to a 25-22 set one win.

Thomson had one of her two kills early in the second set as Wakefield played even with Billerica in the first half. Sophomore Savannah Cummings had a block-kill for a 3-2 lead and Seabury later followed with her own to tie it back up at 4-4.

Desruisseaux had a smart tip shot and later two powerful spikes to slow down an Indians squad who was starting to find their offensive rhythm.

Junior Mia Forti had a kill and Donahue later had an ace to cut the deficit to 13-12. Once again, this was where Billerica pulled away, finishing the set on a 12-5 run.

Despite the fact that most in the gym knew the 19-2 Indians had officially reached another level of play, Wakefield huddled up before the third set and refused to quit, once again hanging with their opponents for much of the first half of set three before Billerica ran away with it.

Imriano had another well-hit ace right down the line, Seabury added another block-kill, Cummings had another kill as did Forti and later Desruisseaux and Thomson.

In the end, Wakefield stuck to their promise of going all out – all game and all season.

With that mentality until the end, the Warriors improved throughout the 2021 campaign, building along the way a foundation that will stand for years to come.

“Summer league, we were a little rocky but we got so much better thanks to coach Wyland,” said Desruisseaux who continued to reiterate what the coach and her staff have meant to this team in season two. “I really think this team can go even further after we’re gone especially because coach is here. But this has really been a great season.”

With that, the seniors said farewell.

“We talk a lot about how we don’t just represent our team but we represent the community and the seniors have really taken ownership of that,” said Wyland. “They wanted to represent our community in a positive way and do the right things and work hard. They did that and it shows, when you do that, good things happen.”

Good things, like the unequivocally best season in program history.