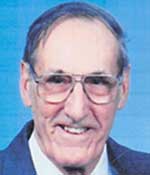 Warren was born in Melrose on Dec. 8, 1920, one of eight children of the late Carl F. and Helen M. (Stevens) Shaw. After graduating from Melrose High School, he served his country during World War II in the U.S. Marines as a Private First Class. Stationed aboard the battleship USS South Dakota as an anti-aircraft crewman, Warren’s fleet was involved with numerous operations and battles in the Pacific Theatre from March of 1942 until July 1945. He was discharged in September of 1945 with an Honorable Service pin, and a Good Conduct Medal.

He married Priscilla Cheever in 1945, and they settled in Melrose to raise a family of four.

Following his time in the service, Warren became a court officer for Middlesex County Court. He first worked as an officer in the East Cambridge House of Correction, then worked for a year as a Deputy Sheriff, and from 1950 until 1972 was a Middlesex County Court Officer before becoming the Chief Court Officer until his retirement in 1985. Warren worked responsibly, always diligently ensuring the safety of the accused and members of the court.

Above all else, Warren was a loving family man who was happiest when with his children, grandchildren and great-grandchildren. He especially enjoyed summer time surrounded by visiting family at their cottage near the beach in Ocean Park, Maine. He will be lovingly remembered.

Warren was the beloved husband of the late Priscilla M. (Cheever) Shaw with whom he shared 66 years of marriage. He was the devoted father of Douglas W. Shaw and his wife Janice of Westborough, Carolyn B. Morrison of Saco, Maine, Candace D. Provencal and her husband Mark of Stoneham, and the late Kenneth L. Shaw. He was the dear brother of the late Arthur Shaw, Walter Shaw, Verna Mason, Avis Brooks, Beulah McCarthy, Marvin Shaw and Helen Wiltshire. He was the cherished grandfather of Brian Shaw, Lindsay Moynihan, Meagan Zahares, Matthew Provencal, Taylor Provencal and Ryan Provencal. He was the loving great-grandfather of Jaymie, Faith, Lillian and Wyatt. Also survived by several nieces and nephews.

Relatives and friends gathered in honor and remembrance of Warren’s life during visiting hours at the Robinson Funeral Home, 809 Main St., Melrose on Sunday, July 17, from 2-6 p.m., and for his funeral service at the Green Street Baptist Church, 179 Green St., Melrose celebrated on Monday at 10 a.m.

Interment with military honors by the U.S. Marine Corps in Wyoming Cemetery, Melrose.