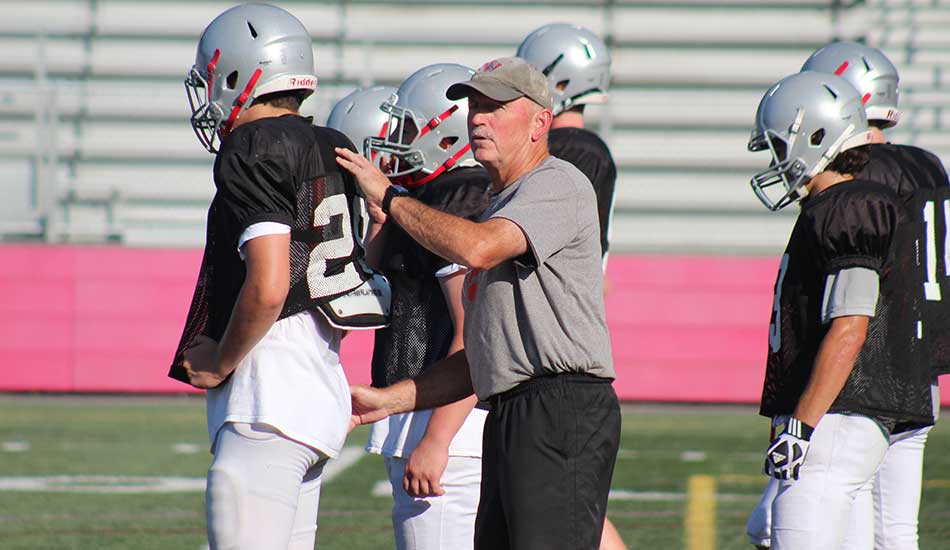 Start it up tomorrow night at Greater Lawrence

WAKEFIELD — “I think the right word is relief.”

That’s how John Rafferty describes the feeling at the beginning of his fourth season as the head football coach at his alma mater. That’s because his third was a little more stressful – as it was for all high school football teams.

Rafferty didn’t mince words when reminiscing about Wakefield football’s first season of 2021, also known as Fall 2, which took place from March to late April. From rule changes that required masks at all times, a limited number of fans allowed and an emphasis on social distancing in the least socially distant sport ever created, to logistical problems like no buses or access to locker rooms – it’s no wonder the coach is looking forward to football in the fall where all the pandemic-related rules of those Saturday morning spring games will disappear like a perfectly struck punt into a Friday night sky.

The Warriors went 1-4 in that five-game Fall 2. Four of those ended in one possession games. The Warriors fell to Watertown 13-6, to Wilmington 9-2 and to Stoneham 15-14. They beat Burlington 9-7. Undefeated Melrose won the final game 35-0, bringing an unceremonious end to what will hopefully be remembered as the strangest and hardest football season in program history.

Enough about that. We’re on to Sept. 10, 2021, the first game of this new and at least more familiar fall campaign. Wakefield will play under the Friday night lights for the first time in 665 days when the Warriors beat North Reading 42-35 on Nov. 15 2019. That’s about two months shy of two years for you non-math majors like me.

That game was a consolation playoff round matchup. The state tournament will return for football as it will for all sports this season. The Warriors are one of 30 teams in the new statewide Div. 3, one of eight divisions for football.

If Wakefield wants to be one of the 16 teams to make the D3 state tournament, they’ll need to lean an experienced group of returning seniors and juniors. Nowhere is that more true than in the trenches where the Warriors return all of their starters on both sides of the ball.

One might think a former All-Star running back at Wakefield High and captain as a defensive back at Syracuse would be partial to those two position groups but coach Rafferty, as always, talks about the offensive and defensive lines as the most important part of a high school team.

“If you have a strong line it will do wonders for you,” said Rafferty who will employ an offensive group unofficially known as the “Law Firm Line.” That’s because it includes not one but two sets of brothers: Ickes, Ickes, Amyouny and Amyouny. Seniors Nate and Luke Ickes will lock down the left side of the O line. Junior David Amyouny will be the center and senior captain Chris Amyouny will play right tackle.

One might assume that the final guard spot would go back to last year’s starter and Wakefield’s lone returning All-Star, junior Ian Dixon. It won’t. Dixon will be shifted to tight end where he will be asked to not only continue his blocking dominance but catch passes from returning starting quarterback, junior Javin Willis. Right guard will be left to junior Kaiden Johnson and sophomore Joe Lamonica, two more strong linemen who will add depth to Wakefield’s best position group.

Together the line will create plenty of opportunities, first and foremost for Willis, a talented dual-threat QB who will finally have a full fall season to work with. He rushed for 230 yards and a TD in five games last season. His athleticism is what stands out the most, whether it’s dodging sacks in the backfield or juking defenders at multiple levels for long scrambles.

“From his freshman season where he started a game and got some experience to the spring and now rolling into the fall he has a lot of game experience,” said Rafferty of Willis. “He does a lot of things well, throwing the ball and with his feet. He does a lot to challenge a defense.”

Willis has proven to be an accurate passer as well, throwing for 489 yards last season for an average of 97.8 per game, something the offensive coaches will ask for again with receiving weapons like Dixon and wideouts like senior captain Bryan Lynch, senior Jack Berinato, junior Tommy Grover and sophomore Steven Woish.

Of course, the other main group the Warrior line will create for are the running backs. Senior captain Leo Yardumian, a “hard, tough runner” according to Rafferty, will get first dibs followed by juniors Nathan Delgado and Bobby DeFeo. All three will have plenty of opportunities to prove themselves as Wakefield tries to replace the dynamic running of graduated captain Tucker Stikeman. All together, the offense must improve at finishing drives. They only accounted for two touchdowns in five games. Wakefield’s third TD of the Fall 2 campaign came on a Stikeman kick return against Stoneham.

Another leader Wakefield is trying to replace is captain Danny Hurley, something easier said than done for someone who was a starter in all three phases of the game: fullback/tight end, inside linebacker, kicker and punter.

Kicking will be a shared job as well with junior Zack Sartori punting and sophomore Mark Letchford taking over place kicking duties.

The Warriors will be largely inexperienced at linebacker, especially at Hurley’s vacated inside backer position which will be manned this season by Lynch and DeFeo. Yardumian returns as an outside linebacker and Grover will likely play the other side. Wakefield’s top defensive backs this season will be Berinato, Woish and junior Christian Delgado.

The defensive line will largely be the same as the offensive line with the Ickes brothers holding down an end and a tackle spot. Dixon will return as an end to terrorize opposing backfields and Chris Amyouny returns as a tackle. Together, as will be the case on offense, it’s this corp who will need to maintain relentless effort in order to take the pressure off of more inexperienced groups.

Rafferty and his staff don’t spend much time talking about how many of Wakefield’s eight regular season games they want to win. Their goals revolve more around making sure the hard work is done every day in practice to put themselves in the best position to succeed.

“We talk about execution for every unit and all phases: offense, defense and special teams,” says the coach. “If we can continue to improve we will be ok. It’s all about execution day-to-day, game-to-game. For us, it’s about forming a team-first identity. Our strength will be as one, not as an individual.”

Of course, beating Greater Lawrence Tech counts as a team goal, whether it’s spoken or not.

The Warriors haven’t won their season-opening game since 2013.

Many of those years have involved tough opponents like Reading to start with but it was these same Reggies who kept that streak going with a 16-14 victory at Landrigan Field in the first game of the 2019 season.

“They have some exceptional athletes,” said Rafferty of Greater Lawrence. “Their team speed is what stands out. They’re a tough matchup.”