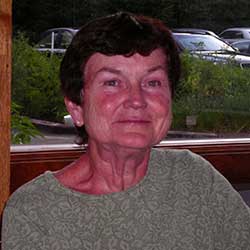 Born in Arlington, Joan was the daughter of the late William C. Robinson and Mary (McAloon) Robinson.

Joan met Peter, the love of her life, in 1962 at a wedding of mutual friends. They embarked on their very first adventure, their first year of marriage, to Oahu, Hawaii where Peter was stationed in the army. Intrepid voyagers, Peter and Joan were always planning their next expedition, from the shores of Maine to the coast of Ireland, to the peaks of the Swiss Alps, castles in France, the countryside of the Cotswolds and a myriad of other beautiful destinations. Joan and Peter were determined to live life deeply.

Joan earned her BS in elementary education, summa cum laude, at Salem State and her Masters degree at Cambridge College. Joan was an educator at Wakefield Public Schools for 23 years. These were the most fulfilling years of her life. Joan was an innovative teacher, always striving to engage her students. She wrote plays and created costumes, making the students the stars of her classroom where they literally brought facts and figures to life. Joan was always so proud of her second-grade students and she was sure to let them know by sending each and every one a card with a personal note upon their graduation from high school. She dearly loved her community.

Joan and her five daughters spent many a sparkling summer day at Lake Winnipesaukee where Peter and Joan owned a lovely cottage. Joan could be seen with “her girls” enjoying Wednesday Margarita nights at On the Border, taking out the week’s troubles at Saturday morning kickboxing classes, analyzing life during countless walks and talks around Lake Quannapowitt, and embarking on whirlwind shopping trips to Boston. She was the architect of countless marvelous memories. We are deeply grateful for her company, counsel, and mischievous sense of humor.

In more recent years, Joan enjoyed competitive games of UNO, bowling and corn hole with her 12 beloved grandchildren. Mimi was loving and generous and she will always be our reigning champion.

Joan was the loving wife of 58 years of Peter Gagne. She is also survived by her five daughters and respective spouses and grandchildren, Cathleen and Tom Wojtkowski and daughter Lauren; Karen Gagne and children Allison, David, and Aimee; Patricia and Scott Antonucci and daughters Nicole and Caitlin; Michele and Jason Wertz and sons Paul, William, and Joseph; Kristin and PJ McGrail and children Kella, Michael, and Shannon.

Her funeral mass will be celebrated in St. Joseph Church, 173 Albion St., Wakefield on Saturday, September 11 at 10 a.m. Visitation for relatives and friends at the McDonald Funeral Home, 19 Yale Ave., Wakefield on Friday from 4-7 p.m. Interment, Lakeside Cemetery, Wakefield.

In lieu of flowers, please make a donation in Joan’s name to the Wakefield Educational Foundation. https://www.wef01880.org/.