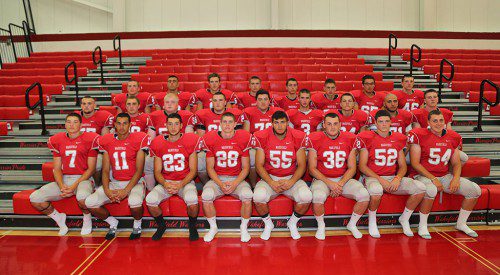 WAKEFIELD — The third part of the 2014 Wakefield-Melrose football trilogy — the Thanksgiving Day Classic — is scheduled to take place tomorrow morning at 10:15 a.m. However this time the contest will be played at Landrigan Field as the Warriors seek to avoid a season sweep by their archrival.

The Thanksgiving Day Classic will be the 55th in the rivalry and it is also the third time this season that Wakefield and Melrose are facing each other. The two rivals squared off in the regular season in September and faced each other in a Div. 3 Northwest quarterfinal. Both of those games were won by Melrose, so Wakefield is hoping for a different result this time around.

In the regular season meeting on Sept. 26, the Warriors (5-5) fell behind by a 17-0 score before rallying in the fourth quarter with 15 points to make things interesting in a 17-15 loss. In the playoff match-up on Oct. 31, Melrose rolled to a 24-0 triumph to end Wakefield’s hopes of going to a Super Bowl.

Meanwhile, the Red Raiders (9-2) kept on winning in the postseason and are in the Div. 3 Super Bowl which will be played on Saturday, Dec. 6 against Dartmouth at 6 p.m. at Gillette Stadium.

“This is the third time we’re facing Melrose and it’s tough,” said Warrior head coach Mike Boyages. “We were talking about it at coaches meeting and Woburn and Winchester are in the same situation. The one thing that is different is Melrose is moving on. It’s a little different than Woburn-Winchester. But it’s still Thanksgiving and we’ll do what we can to win the game. It’s on our field this time and it’s still a big game. That shouldn’t change.”

“They’re familiar with us and we’re certainly familiar with them,” said Melrose head coach Tim Morris. “There will be no surprises.”

Melrose leads the longstanding rivalry, 55-41-6, with tomorrow’s game being the 103rd meeting between the schools. The rivalry dates back to 1901. Wakefield, however, leads the Thanksgiving Day 29-22-3, which dates back to 1960.

The Warriors are also 18-5-1 against Melrose over the past 21 years but have lost three in a row dating back to Thanksgiving last year. All three contests were played at Green Field. Also, Wakefield has lost two in a row on Thanksgiving and hasn’t posted a November victory against the Red Raiders since they prevailed by a 3-0 score in 2011, the last time the Warriors played in a Super Bowl.

Since the Halloween meeting, Wakefield lost to Winchester, 30-26, and edged Burlington by a 14-13 score. Melrose, meanwhile, defeated Woburn (20-19) and Concord-Carlisle (28-20) to repeat as Div. 3 Northwest champion. The Red Raiders played last Saturday and defeated Tewksbury, 14-7, in the Div. 3 state semifinal to advance to the their first Super Bowl contest since 1982.

“Melrose has been playing exceptionally well and they played a heck of a game against Tewksbury,” said Boyages. “They are a very good football team. They play good defense and special teams. In the second game, we turned the ball over and you can’t make as many mistakes as we did. You can’t hurt yourselves with turnovers and that has been our Achilles’ Heel against them recently. To be successful against a team like that, you can’t turn the ball over and make mental mistakes.”

Even though the two teams have already played each other twice, Wakefield still has plenty of incentive to come out and play hard. Although the Red Raiders are already in the Super Bowl, the Warriors would like to get at least one win against them this season and end the 2014 season on a winning note.

“There is a lot of incentive. With it being Thanksgiving, you can throw out the records,” said Boyages. “They’re a good team and they’ll be playing another game. For us, a win would be a great way to end the season. I hope being a home will be a factor. We’ve had a good record at home this season. It would also be a great way for our seniors to end their careers.”

Even though Melrose has defeated Wakefield twice, Morris doesn’t expect an easy game for his team. The two rivals have played some exciting games on Thanksgiving including last year’s 13-7 contest which Melrose made a late defensive stand to prevent the Warriors from potentially scoring the winning touchdown.

“Since we played them, Wakefield has gone to more of a passing attack. A lot of that is because (Luke) Martin is out. Their quarterback, Anthony Cecere, has done a great job for them,” said Morris. “They also have good receivers and they are always tough on defense. They’ll be tough to beat. It always is a good game.”

Martin is out for the season and, ironically, it was the quarterfinal game against Melrose where the senior running back and linebacker where he suffered his season ending injury with what has been reported as a torn ACL, MCL and meniscus.

That has resulted in the Warriors leaning more heavily on their passing game. Cecere has completed 88 of 178 passes for the season for 1,271 yards. The senior has thrown 11 touchdowns and seven interceptions.

Melrose is led by senior RB Jack Hickey and senior QB Jake Karelas. Senior WR Will Caffey and sophomore WR Mike Pedrini have been key players in the Melrose offense as well.

Hickey gained 102 yards on 15 carries with a touchdown in the quarterfinal meeting. Hickey also returned a fumble 43 yards for a TD. Hickey didn’t play in the first game in September.

Pedrini caught an 11 yard pass and rushed the ball five times for 71 yards and a TD in the playoff meeting. In the first game against Wakefield, Pedrini had two receptions for 78 yards and a TD.

Defensively, the Red Raiders are led by linebackers Zack Mercer and Brian McLaughlin, both seniors.

“We’ve played three tough games the past three three weeks (since the playoff game against Wakefield),” said Morris. “The kids have played some pretty good football. We’ll play as hard as always. We do have a quick turnaround from the Tewksbury game. Wakefield’s had over a week off.”

“Melrose has done a nice job,” said Boyages. “We’ve been to four Super Bowls and this will be the first time for them since 1982. We want to win Thursday against them and then we’ll be rooting for them to win the Super Bowl. They are the lone representative from the Middlesex League and we’ll be pulling for them.”