Warriors do their part to clinch a playoff berth 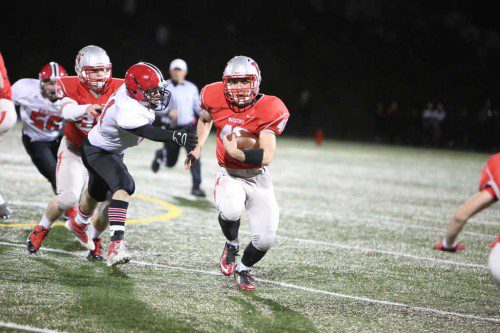 WAKEFIELD — The Wakefield Memorial High football team was happy to be back home at Landrigan Field on Friday night for homecoming. However after the contest, the Warriors hope they have played their final home game of the season.

Wakefield did its part to clinch a playoff berth as it posted a 28-7 triumph over Winchester in a Middlesex League crossover game. Right after the game, the Warriors found out that Belmont had lost to Lexington by a 35-21 score which put them into the Div. 3 Northwest playoffs as the eighth and final seed.

That means that Wakefield (2-5 overall, 1-4 in the M.L. Freedom Division) will face top-ranked Melrose in a quarterfinal round game on Friday night at 7 p.m. at Fred Green Memorial Field. The Warriors will be on the road for their entire playoff run.

As for Friday night, the Warriors scored on the opening possession, the first time they have scored points in the first half all season, and never trailed as they pulled away in the second half.

Wakefield out-gained Winchester in total yards, 299-107, and had a huge advantage on the ground with 224 rushing yards to Winchester’s 13. Through the air, Wakefield had 75 yards passing and the Sachems had 94.

“We had the one big mistake which led to their touchdown,” said Coach Steve Cummings. “But we responded well. We scored one our first drive which we haven’t done all year. This was a great win for the seniors. I thought Logan Dunn did a great job for us in the power game and he played like a man possessed on the offensive line. Our quarterback (Ned Buckley) also picked up four first downs on the quarterback sneak.

“We were able to get our run game going and that opens up so many things,” continued Cummings. “Paul McGunigle was very decisive with his runs. I was very happy with the effort. I thought offensive coordinator Ruben Reinoso did a great job with the play calling. It was a great win. Our guys played four quarters of football.”

Defensively, Wakefield shut down Winchester and limited the Sachems’ time of possession with its own run game. Wakefield ran 70 plays to Winchester’s 35. Leading the way was junior DB Alex McKenna with four tackles. Also senior DB Ben Yandell had an interception and returned the ball 26 yards which helped set up Wakefield’s final touchdown of the game.

The Warriors were home for the first time since Sept. 25 and they made the most of Senior Night by taking the ball and scoring on their first possession after the Sachems won the coin toss and deferred. Wakefield mounted a 15 play scoring drive that ate up six minutes of the first quarter.

Starting at their own 33 after a 28 yard kickoff return by Joe Marinaccio, McGunigle got the Warriors going with runs of 12 yards, one yard, four yards and six yards. Kane caught a seven yard pass from Buckley (who went eight for 20 for 75 yards) and then had runs of 16 yards, six yards, and two yards.

On third down and two from the Sachem 13, McGunigle was stopped after a yard gain setting up a fourth down. Buckley called his own number gaining the yard needed to move the chains. Kane then was stopped for no gain and McGunigle was held to a yard gain as Winchester’s defense stiffened. On third down and nine, Buckley’s pass fell incomplete. But a Sachem penalty for roughing the passer set up a first down and goal at the Winchester 5.

Kane barreled into the end zone from five yards away to put Wakefield on the scoreboard. Wakefield faked the extra point and the holder, Buckley, found senior Alex Jancsy wide open in the end zone for the two-point conversion to put the Warriors up 8-0 with 5:00 left in the first quarter.

“We saw that Winchester was very aggressive on the extra points so we had the fake in there,” said Cummings. “We also went for the onside kick and nearly recovered it. We came out and wanted to be aggressive.”

Winchester’s Max Ward recovered the kick at the Sachem 47 but Winchester failed to pick up a first down as it punted the ball away.

Wakefield picked up a first down on a two yard run by Buckley to bring the ball out to its own 30. But a clipping penalty on the next play forced the Warriors into long yardage and they wound up punting the ball on the final play of the first quarter.

The Sachems went three and out on their next series of downs as Wakefield began its first drive of the second quarter at its own 22. Kane gained a yard and Winchester was flagged for unsportsmanlike conduct which brought the ball out to the 38. McGunigle lost six yards on first down. On second down Buckley found senior WR Tighe Beck with a four yard pass. However, a fumble on the play resulted in Winchester’s Millyan Phillips picking up the loose ball and returning it 36 yards for a Sachem touchdown.

Shaya Hedayatina added the extra point to cut the Wakefield lead to 8-7 with 7:30 remaining in the second quarter.

Wakefield went three and out and then Winchester took over its own 22. On second down, sophomore QB Liam Fitzpatrick (who completed eight of 18 passes for 94 yards) found junior WR Sam Curtin with a 39 yard pass. But Curtin lost the handle on the football and Buckley recovered it at the Warrior 35.

Wakefield then had the ball for 11 plays as it moved the ball into Winchester territory. Key plays on the drive for downs included a 10 yard reception by senior tight end Nick Elcewicz and a four yard run by Kane. Winchester was also called for offside on third down which also moved the chains. But the drive stalled and Wakefield turned the ball over on downs after a seven yard reception by McGunigle on a fourth down and nine play as Winchester took at its own 18.

The Sachems didn’t go anywhere and punted the ball away. But Bill Miller’s punt went only 15 yards which gave the Warriors the ball at the Winchester 34 with 33.8 seconds left in the half. Wakefield took full advantage of the bad punt and scored its second TD of the night before halftime.

After an incompletion, Winchester was flagged for being offside. After an incompletion, Buckley found Jancsy down the left side line with a 27 yard pass on a third down and five play to set up a first down and goal from the 2 with 10.7 seconds left. After a time out, Kane plunged into the end zone to give Wakefield at 14-7 lead.

The PAT attempt was blocked as the Warriors led by seven at halftime.

Winchester took the ball to start the second half and went three and out as the Warriors began their first second half series at their own 27. Wakefield then sustained a 14 play drive to score its third touchdown of the night.

McGunigle had a run of a yard and Kane gained 11 yards. McGunigle had runs of seven, eight and four yards with a spot holding penalty thrown in as well. On third down and one from the Warrior 48, Buckley gained three yards for a first down. After a two yard run by Jancsy, Beck caught a seven yard pass setting up a third down and one from the Winchester 40. Buckley gained two yards to move the chains once again.

After an incompletion, McGunigle had runs of 15 yards and two yards. Marinaccio, a junior, had a 10 yard gain setting up a first down at the 11. Marinaccio got the handoff again and raced to the left corner of the end zone for the TD.

McGunigle added the PAT to give Wakefield a 21-7 lead with 3:01 left in the third quarter.

Senior WR Sam Casey caught a 13 yard pass for a first down as Winchester moved the ball into Wakefield territory. But the drive stalled at the beginning of the fourth quarter and a three yard loss on a pass to junior WR Max Ehrbar on fourth down gave the Warriors the ball back at their own 38.

But an intentional grounding penalty on the Warriors in long yardage as they punted the ball back to Winchester.

The Sachems, starting at their own 19 after a 54 yard punt by Pat Leary, picked up a first down on a 11 yard catch by Casey. But two plays later, Fitzpatrick’s pass was intercepted at the Winchester 45 by Yandell and he returned the pick 26 yards as Wakefield began its final scoring drive at the Sachem 19.

McGunigle added the extra point with 3:09 left to give Wakefield a 28-7 lead.

Miller caught a 29 yard pass for a Sachem first down but Winchester eventually gave up the ball on downs at the Warriors. Wakefield then ran two plays to kill the clock and clinch the victory.

“This is our final home game. We are going to be a seven or eight seed for the playoffs and we’re going to be on the road throughout,” said Cummings. “We don’t want to come back here again this season.”