Warriors get a little consolation with another home game 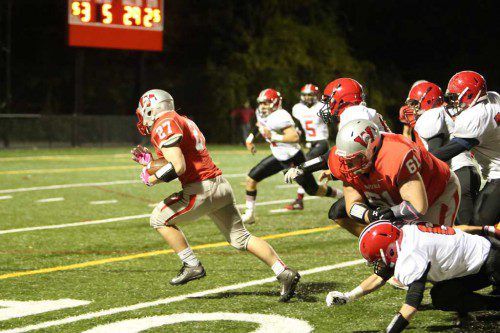 SENIOR RB Alex Jancsy (#27) outraces the Winchester defense to help set up one of four Wakefield touchdowns two weeks ago at Landrigan Field. The Warriors are back home to face Arlington tomorrow night and will seek to earn a second straight home victory. (Donna Larsson File Photo)

WAKEFIELD — The Warriors may be out of the football playoffs but the one consolation they get is one more home game this season at Landrigan Field.

It will most likely be Wakefield’s final home game of the year with the second consolation round contest most likely to be on the road along with the annual Thanksgiving Day game scheduled to be played in Melrose.

The Warriors (2-6) were hoping to remain on the road in the playoffs, but suffered a 21-0 defeated to Melrose last Friday night in a quarterfinal. Meanwhile, Arlington (5-3) was crushed by Wayland, 41-7, in its quarterfinal contest which set up this week’s matchup at the home of the lower seeded Warriors.

“We weren’t hoping to be back here but we’re going to play out the season,” said Coach Steve Cummings. “The kids are disappointed to be out of the playoffs, but these three games will give us a chance to reassess who we have coming up. I told the kids they have three more opportunities to play. Three football games is a lot. We want to have a good day for our seniors.

“It is tough losing to your rival but we have two other games before we see them again on Thanksgiving,” added Cummings. “We need to see where we can get better.”

The Spy Ponders play in the Middlesex League Liberty division and the Warriors haven’t faced them since the 2012 season. That is before Arlington became a contender in the division winning a league title and challenging for two others including one this year. The Warriors are 2-0 against the Spy Ponders since they joined the M.L. having won both previous meetings by lopsided scores.

“Arlington came in second in the Liberty,” said Cummings. “They had a tough time at Reading but up until then they were right in the hunt. They have a quality quarterback (Alec Coleman) who got hurt against Wayland and didn’t finish the game. Their backup (Patrick McCune) played most of the game. We’re not sure who will be at quarterback this week so we are preparing for both.”

Coleman rushed for a 73 yard touchdown last Friday night before his injury and he has been the catalyst for the Spy Ponders. Against Woburn on Oct. 9, Coleman rushed for four touchdowns as Arlington edged the Tanners, 34-33, in a thrilling come from behind win.

The visiting Spy Ponders took a 7-0 lead when Coleman broke his TD run on Arlington’s first play from scrimmage. Senior Clark Ewen’s extra point made it 7-0 just 1:22 into the contest.

Late in the second quarter Arlington, which was already playing without injured captain Alex Gera, lost both Ewen (ankle) and Coleman (shoulder) to injury.

Ewen was able to return in the second half but Coleman did not come back and is likely done for the season with what looked to be a serious injury to his shoulder after he was sacked by two Wayland players.

Senior QB McCune took over at QB and he had trouble moving the Spy Ponders down the field against Wayland’s defense.

“Their backup (McCune) was pretty good but he doesn’t have the legs of their starter (Coleman) who runs the speed option and is an outstanding athlete. He stands big in the pocket and is a different type of quarterback,” said Cummings. “They run the spread offense and we’re not sure who is going to be at quarterback. He (Coleman) broke a touchdown run from 70 yards out. After he got hurt, I think it took the air of the Arlington. We don’t know which quarterback will start, so it is challenging for a defense because you have to prepare for them both and have a game plan for whoever gets the ball. It is a big obstacle on the defensive side.

“They play a 4-4 defense and the linebackers are excellent going from sideline to sideline,” continued Cummings. “We need to find a way to pick up first downs. We had our shot against Melrose with the turnovers but they’re a good football team and they’re solid on defense.”

The Warriors were without two offensive linemen last week, Jared Regan and Nick Nice. Mike Hakioglu is also nursing an injury. Cummings said Wakefield was really thin up front last Friday with just five players by the end of the game. He is hoping to have Evan McMasters back to help solidify the line and give Wakefield a little more depth up front.

Since the new playoff format was installed, Wakefield has lost in the quarterfinal round each of the three years. So the Warriors are in a familiar position. The past two years, Wakefield played at Winchester and went 1-1. Last fall, the Warriors fell behind by a 30-0 score before rallying for 26 straight points to make things interesting at the end.

“We have to see how they (the players) respond,” said Cummings. “We rolled 28-14 two years and and fell behind 30-0 in the second quarter last year before we got going cutting the score to 30-26 before we ran out of time. We’ll take these next two weeks to see where we need to get better during the offseason.”

A win will help give Wakefield some momentum headed into the final stretch and it is something the Warriors can build on for next year.