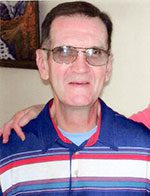 Clarence Sawyer was born in Melrose, one of five children of the late Peter H. and Beulah (Craigie) Sawyer. He was raised in Melrose, graduated from Melrose High School and served in the U.S. Army honorably while stationed in Korea.

Clarence, known to many as “Clancy,” worked for the Commonwealth of Massachusetts as a senior clerk in the Department of Revenue Abatement Bureau. With a wide skill set and years of experience, he was considered the “jack of all trades” in the office by his colleagues.

Clancy was a simple, kind and humble man. In 1999, he retired to enjoy day trips with the Wakefield and Stoneham Senior Centers. In his free time, he enjoyed reading, history and playing cards.

Clancy was the beloved husband of the late Phyllis L. (Beck) Sawyer. He was the step-father of Cheryl L. Smith of Medford. He was the dear friend and devoted companion of Doris P. Clow of Stoneham and her daughter, Barbara Allaire and her husband Ronald of Rhode Island. He was the cherished brother of William S. Sawyer and his wife Margaret of Exeter, N.H., Norman T. Sawyer of Virginia, Mary A. Sawyer and her late husband Leo of Malden and Barbara I. Sawyer of Arizona. Also survived by many nieces and nephews, and William and John Allaire.

Relatives and friends gathered in honor and remembrance of Clancy’s life during visiting hours at the Robinson Funeral Home, 809 Main St., Melrose on Wednesday, Nov. 4, from 4 to 7 p.m, and again on Thursday for his funeral service celebrated at 10 a.m.

For online tribute or to share a memory visit RobinsonFuneralHome.com.