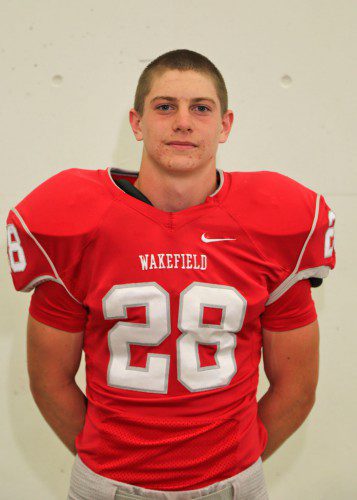 Daily Item Football Player of the Week:
SENIOR RB/LB Luke Martin was named the Daily Item Player of the Week for his effort in Wakefield’s 35-27 overtime game against Lexington. Martin rushed for 207 yards on 38 carries and scored two touchdowns. On defense, Martin had three tackles. (Donna Larsson Photo)

Which team rebounds defensively could be the difference maker when the two squads meet tomorrow night in a non-league game at Manning Field in Lynn. Kickoff is at 7 p.m.

The Warriors lost a high-scoring 35-27 game in overtime to Lexington while the Bulldogs were crushed by Peabody, 43-7.

“They (Lynn English) had a tough game last week. Peabody is playing on a new turf field,” said Coach Mike Boyages. “Peabody ran the ball pretty effectively and I would expect Lynn English to make the adjustments on defense.”

Little went right for the Bulldogs last week as they helped Peabody christen its newly-refurbished field in the first game of the season for both teams. English allowed the Tanners to amass 505 yards of total offense with 418 yards on the ground.

“Defensively, the Lynn English coach might tell they were out of alignment and that was the problem,” said Boyages. “We ran our full house backfield and two tight end set. We are prepared to expand our offense and go with some spread sets. We didn’t do that last week because what we were running was so effective.”

On defense, the Warriors gave up 356 yards with 204 on the ground. Making Lexington go was junior QB Jeff Costello. Costello ran for 144 yards on 16 carries and scored two touchdowns. Through the air, Costello completed seven of 13 passes for 125 yards and two TDs.

The Bulldogs moved the ball against the Tanners but had trouble putting the ball into the end zone. They ran for 112 yards and quarterback Lucas Harris passed for 115.

Getting the opener out of the way was a good experience for a Warrior team that has many new starters on both sides of the ball.

“We made some changes with the responsibilities,” said Boyages. “As it turned out if we made that PAT, we would have won the game. Lexington rushed all 11 guys and the guy that blocked came way from the outside. We probably needed to get to the tee a little quicker.”

Lynn English will be playing its first home game of the season against Wakefield. Also, the Bulldogs lost at Wakefield last year, 33-8. So Lynn English is hungry to earn a victory against the Warriors.

Wakefield also has junior WR/DB Tighe Beck and senior WR/DB Chris Calnan returning and that will give the Warriors two more experienced players on the field on both sides of the ball as they hope to earn their first victory of the 2014 season.

Note: MSO Web Radio at www.moorestuffonline.com will be broadcasting Wakefield’s game against Lynn English Friday night at 7 p.m with the pre-game at approximately 6:30 p.m. Fans who cannot attend the game can hear it live on the Internet in addition to reading an in depth story and game statistics in the Monday, Sept. 22 edition of the Wakefield Daily Item.