Warriors keep the Bulldogs on a short leash

Football team has a big first half, blasts Lynn English, 32-14 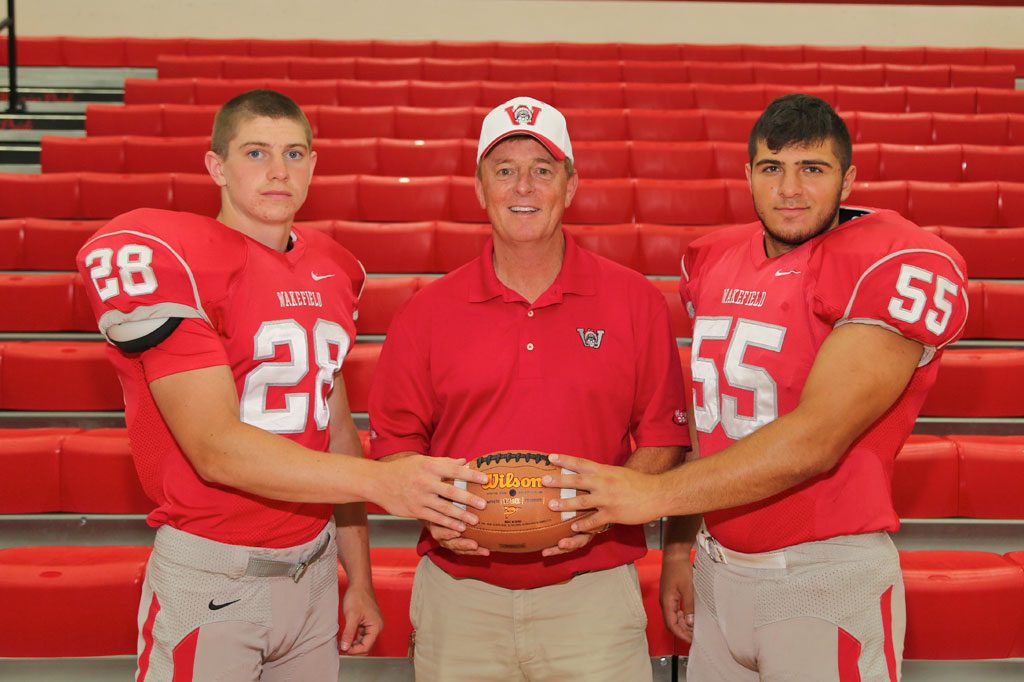 THE WARRIOR football team is off to a 1-1 start after its 32-14 triumph over Lynn English on Friday night at Manning Field. Leading the 2014 squad are senior co-captains Luke Martin (left) and Joe DiFazio (right). In the middle is Head Coach Mike Boyages. (Donna Larsson Photo)

LYNN — The Warrior offense put up plenty of points in the opening game against Lexington. On Friday night against Lynn English, the defense and special teams decided to get in the act, too.

The Wakefield Memorial High football team scored on an interception return and a fumble return to go along with three rushing touchdowns as it rolled to a 32-14 triumph over the Bulldogs at Manning Field.

The Warriors are now 1-1 overall on the season, while the Bulldogs fell to 0-2 on the year.

Wakefield was leading 6-0 when it turned the ball over at the Lynn English 1 yard line as it was driving for a possible second TD. But three plays later, senior DB Brian Dickey intercepted a Lucas Harris pass at the Bulldogs 30 and brought it back for the score.

That allowed Wakefield to take a 12-0 lead and it never looked back in the contest.

The Warriors were up 12-6 in the second quarter when they scored two touchdowns in the span of 13 seconds to take a 26-6 lead. After a 10 yard TD run by senior RB Luke Martin, junior placekicker Paul McGunigle recovered a fumble on the ensuing kickoff and returned it 16 yards for the TD.

“It’s a win on the road and we’ll take it,” said Head Coach Mike Boyages. “I thought we could have done a better job on the offensive end. Our defense played well. Brian Dickey made a heck of play on the interception return and Paul McGunigle returned the fumble for a touchdown. We were opportunistic.”

The Warriors gained 276 total yards with 237 rushing. Leading the way was Martin with 145 yards on 15 carries and three touchdowns.

While Wakefield gained its yards, it also turned the ball over three times including near the goal line and deep in its own end late in the first half. Neither led to scores but Boyages knows Wakefield will need to do a better job against Melrose this week in the Middlesex League Freedom division opener.

Even though the offense wasn’t as dominant as it was against Lexington, the Warriors did have a much better defensive effort. Wakefield held Lynn English to 255 yards of total offense (188 rushing, 67 passing). But the Bulldogs turned the ball over three times with two of those turnovers leading to a pair of Wakefield touchdowns.

The game started off with a break for the Warriors as they fumbled the opening kickoff but were given a reprieve as Lynn English was flagged for being offside. As a result, Martin got the second kickoff and returned it 17 yards to the Wakefield 32 yard line.

On the first play from scrimmage, Martin broke a 68 yard run for a touchdown to put Wakefield in front, 6-0, with 10:46 left in the opening quarter.

The extra point attempt was no good, however.

Lynn English went three and out on its first possession of the game as Wakefield begin its second set of downs at its own 39 yard line.

Wakefield sustained a 12 play drive as it marched down the field. Martin had runs of zero, three, four and two yards. Junior RB Paul McGunigle (46 yards on seven carries) had gains of five, four, 18, zero, eight and 10 yards on the drive. On second down and goal from the Bulldogs 7, senior co-captain Joe DiFazio gained six yards but fumbled the football with Lynn English’s Jeremy Garcia recovering the loose ball at the 1.

Lynn English took over at its own 16 after a personal foul penalty against Wakefield. Senior RB Stevie Collins (98 yards on nine carries with a touchdown) had gains of one and two yards. On third down and seven from the 19, Harris (who completed 12 of 22 passes for 67 yards) was intercepted by Dickey at the Wakefield 30. The senior returned the ball the entire way to put Wakefield in front, 12-0.

The rush on the two point conversion attempt failed but the Warriors led 12-0 with 2:35 left in the first quarter.

Lynn English answered on its next drive as which was 12 plays long and ate up the rest of the first quarter clock and the first three and a half minutes of the second quarter.

Starting at the Lynn English 23, Collins had runs of 13 yards and two yards. Harris then completed passes of zero yards to Miguel Martinez, 23 yards to Daekwon Shepard and four yards to Collins to end the first quarter.

Collins was stopped for no gain from the Wakefield 34 to start the second quarter. Collins caught a pass for two yards but a spot penalty for holding pushed the ball back to the Warrior 42. Harris gained 15 yards on a keeper for a first down on a third down and 14 play. Then, Harris fired an incompletion before finding Collins for nine yards. On third down and one from the Warrior 18, a false start penalty pushed Lynn English back five yards. A pass interference penalty on Wakefield, gave the Bulldogs a first down and goal from the Warrior 8.

Harris called his own number and took the ball in from eight yards away. Harris’ pass on the two-point try was incomplete as the Bulldogs cut the lead to 12-6 with 7:21 left in the second quarter.

McGunigle had a 15 yard kickoff return which resulted in great field position for the Warriors at their own 42. Wakefield needed just three plays to score again.

The big play was a 39 yard pass from senior QB Anthony Cecere to Beck down the right sideline. Cecere completed one of two passes for 39 yards as Wakefield only put the ball in the air four times in the contest.

Martin then had a nine yard run. On second down and one from the Lynn English 10, Martin found the end zone for the second time of the night. The rush by Martin failed on the two-point conversion attempt as Wakefield led, 18-6, with 6:25 left in the first half.

On the ensuing kickoff, junior Sakada Chhay fumbled the ball away after a four yard return. McGunigle scooped up the loose ball and returned it 16 yards for the TD. Martin ran in the two-point conversion to give Wakefield a 26-6 advantage with 6:12 left in the second quarter.

The Bulldogs went three and out on their next set of of downs and Wakefield did as well. Lynn English was backed up and had a punt only went forward for six yards as the Warriors got the ball back at the Bulldogs 25. After a false start and a three yard run by Martin, Cecere gained three yards before losing the ball as Martinez recovered the loose ball with 4.9 seconds left in the first half.

Lynn English got the ball first to begin the second half and didn’t gain a first down. The Warriors started their first drive of the third quarter at the Bulldogs 30 after a 33 yard punt return by Martin.

Wakefield needed six plays to score its final TD of the night. McGunigle had runs of five yards and six yards before going down with an injury. McGunigle left the game and was taken away by ambulance as a precaution and was later diagnosed with bruised ribs.

On first down and 10 from the Lynn English 19, Martin had runs of seven, five and five yards to set up a second down and goal from the 2. Martin plunged into the end zone for the third time of the night.

The Bulldogs picked up four first downs on their next drive which started at their own 38. Harris had a nine yard run for a first down. A roughing the passer penalty on Wakefield also moved the chains. From the Wakefield 40 on a second down and three, Collins broke an 18 yard run. From the Warrior 28 on a third down and 16 play, Harris gained 26 yards before fumbling the ball away at the Wakefield 2. Beck recovered the loose ball to prevent Lynn English from scoring.

Brown had a nine yard run and Martin gained five yards for a first down at the Wakefield 16 as the third quarter ended. Wakefield put in backups in the fourth quarter but punted the ball away as Lynn English took over at its own 41.

After an 11 yard run by Chhay, Collins broke a 48 yard TD run down the left sideline as a missed tackle resulted in the senior having a clear path to the end zone. Collins then caught a pass from Harris for two points as the score was cut to 32-14 with 7:58 left in the game.

Wakefield picked up four first downs on its next series as it up nearly ate up the entire fourth quarter clock. Martin had a gain of 12 yards to move the chains. Junior RB Alex Jancsy had a two yard gain to go along with an unsportsmanlike penalty as the Warriors gained another first down. Junior RB Zach Conlon had a three yard on a third down and three from the Lynn English 26 to move the chains once again. The final first down came on a five yard run by sophomore RB Carmen Sorrentino on a fourth down and one play from the Bulldogs 14.

After a holding penalty pushed Wakefield back to the Lynn English 19, senior QB Will Bergendahl heaved up a pass which Harris intercepted in the end zone with 13.7 seconds left. Harris then gained 14 yards on the final play of the game.