Resident of town nearly all his life 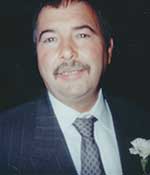 NORTH READING — Wayne T. Dalton – 60, of North Reading and formerly of Chelsea, died peacefully on Sunday, June 12, 2016, at the Kaplan Family Hospice House in Danvers, after a lengthy illness.

Born in Chelsea on June 29, 1955, he was raised in and attended schools in North Reading and was a graduate of North Reading High School, Class of 1974. Wayne held many positions as a tractor trailer driver, including Superior Columns in Chelsea and National Lumber in Newton. He was a resident of North Reading for the past 58 years. He was a member of St. Theresa’s Church, American Legion and the North Reading Loyal Order of Moose.

Wayne was known for his wit and sense of humor. He was a very generous and giving person. He loved fishing, snowmobiling and his many trips to Prince Edward Island.

Family members include his beloved parents, Chester and Charlotte (Hughes) Dalton of North Reading; his loving daughter, Briana Dalton of Billerica; his brothers, James Dalton of Woburn and Shawn Dalton of North Reading; his sisters, Paula Sollazzo of Wilmington and Pam Howe of Burlington; his close friend, Howard Arnold of Andover. He is also survived by a strong and loving family of aunts, uncles, cousins and friends from here and Prince Edward Island.

His Funeral will be held from the Croswell Funeral Home, 19 Bow Street, North Reading on Saturday, June 18 at 9:15 a.m., followed by a 10:30 a.m. Funeral Mass at St. Theresa’s Church, 63 Winter Street, (Rt. 62) North Reading. Calling hours will be held on Friday, June 17 from 4 to 8 p.m. In lieu of flowers his family request that Memorial Contributions may be made in his name to the charity of one’s choice. WWW.CROSWELLFUNERALHOME.COM