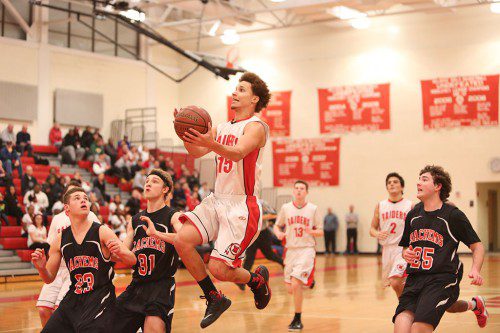 MELROSE — It was no surprise that the 2014 Red Raider hoop team took a victory at their home opener Tuesday night but the manner in which they won sure was.

Melrose overcame a 22-5 first quarter deficit on a second quarter surge to beat Winchester 56-54 at the Melrose Middle School gym for their first win of the season. The Raiders (1-1) outscored the Sachems (0-1) 22 to 2 in the second quarter behind the legs of newcomer Anthony Gilardi, a senior who led with 23 points and nine rebounds and Melrose senior captain Colby Andrews who tallied 19 points and 11 rebounds for a double double.

The Raiders pick up their first victory after a close 54-53 loss to Lincoln-Sudbury (1-1) Saturday night at home.

“We executed our offense well,” says Melrose head coach Mike Kasprzak after the game. “We rolled Colby [Andrews] to free throw line off screens so he could play pick and roll with Anthony a little easier.” Indeed, Andrews and Gilardi became a tough 1-2 act for the Sachems, who broke out into a large 19-5 lead over Melrose after the first while the Raiders struggled to find their legs. Senior captains Will Caffey and Colby Andrews were the only Raiders to find the net in that frustrating first quarter. Going into the second Melrose made that adjustment and it worked. Fueled by a Julian Nyland three pointer and a steal from Raider Will Caffey, Melrose went on a 22 point tear, limiting the Sachems to just two points to give Melrose a 27-24 lead at the half. Gilardi was untouchable in the quarter with 10 straight points.

“We forced 20 turnovers after first quarter which is how we’re going to have to play to have any type of success,” says Kasprzak.

Gilardi kept Melrose above water with baskets that gave Melrose a lead of 30-26 before Winchester’s big man, 6’5″ Mike Grassey (23 points) took over and lifted the Sachems to a 43-39 lead. Melrose defense made all the difference in the fourth, including dynamic play by Will Caffey, who helped force turnovers and rebounding by Christian Pizzotti and Andrews. Gilardi helped close the gap with a three pointer that narrowed the deficit to 43-42. From there Andrews hit 2-2 on the foul line to give Melrose a lead. Andrews struck again with two more baskets to lift Melrose 50-47. Newcomer T’Mahri Mercer came up big in the waning minutes of the game with a basket and perfect foul line shots, which helped Melrose maintain a 56-54 edge.

After the game Kasprzak spoke of the importance to preparing for a tougher schedule. “I’m proud of our players but we need to improve as we play Belmont, the pick of the Middlesex League on Friday,” he said.

Indeed, the Marauders will be stiff competition. They bring to the court league MVP Adam Kleckner (6-5) and junior Matt Kerans, who average 18 and 16 points respectively. However, Belmont is playing without 6-1 sophomore Jaylin Hinton who transferred to Governors Academy.

Melrose will travel to Belmont on Friday for the 5 p.m. match up.