Lady shooters open with a win

Debuts season with 57-30 rout of Winchester 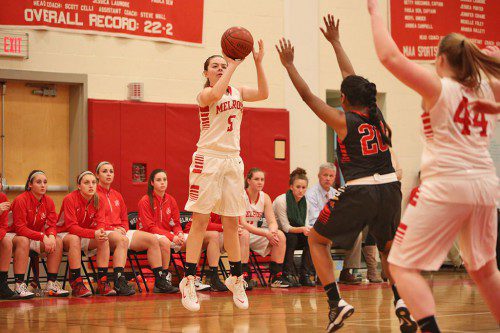 SARAH FOOTE led the Lady Raider team to victory with 16 points during their 57-30 rout of Winchester. (Donna Larsson photo)

MELROSE — The Melrose Lady Raider hoop team opened their season in fine fashion with a 57-30 thumping of Winchester at the Melrose Middle School gym on Tuesday night for a 1-0 start to the season. Melrose’s Sarah Foote led with 16 points followed by Victoria Crovo, who posted 10. Melrose exhibited balanced offense, in-your-face defense and limited turnovers which helped them dominate the Sachems from start to finish.

Melrose hit the boards first with baskets from Leonora Ivers and Sarah Foote, who had six first quarter points and an impressive steal to give Melrose a 6-3 lead in the opening minutes of the game. Melrose’s Cat Torpey was among the number of sophomores with impressive performances and she hit a basket drawing a foul to lift Melrose 13-6 at the end of the first. Melrose’s defense was solid, keeping the Sachems at bay, including efforts from senior Allie Nolan, Foote, Caroline Nolan and junior Julia Foley, who was all over the Sachems in the second. Melrose’s Aly Bornstein hit a shot that helped the Lady Raiders take a larger 21-7 lead, while Caroline Sullivan came on strong to close the half out with back to back shots to make it a 30-14 game. At the half Foote led with 7, Victoria Crovo with 6, and Allie Nolan with 8. Nolan had a strong third with a basket that helped increase the lead to 34-20 and Victoria Crovo won the rebound game, while also going 2-2 on the foul line. Melrose held a 42-24 lead after the third and were not done scoring by a long shot. Foote continued her strong game by hitting two shots, including a three, with 4:00 left in the game and a basket by Julia Foley ended the rout at 57-30.

Coach Lindsay Shanahan was pleased with her team’s effort. “I’m just very excited about how strong they came out. Huge intensity and strong defensive effort led to a fast-paced transition game.”

After a year of struggle in 2013, the 1-0 Lady Raiders will look to extend into a winning streak when they travel to Belmont on Friday night for a 7 p.m. game.