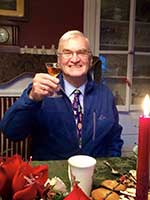 Bill was the beloved husband of 45 years to Mary (DiMino) Forbes. He was the loving father of William H. Forbes III of Saugus, Scott M. Forbes and his wife Susan of Melrose, the late Joel A. Forbes and Julie Hollenbaugh and her husband Joshua of Florida. He was the cherished grandfather of Abygail, Will, Jackson, Carter, Cyann, Camden and Jaycee. He was the caring brother of Patricia Fresco of Stoneham, Felicia Kalloch and her husband David of North Carolina, Mark Forbes of Massachusetts and Cindy Foulkes and her husband James of Florida. He is also survived by many nieces, nephews and friends.

Bill served his community and his country with pride and patriotism. Born on Dec. 13, 1947, Bill grew up in Everett. Upon his graduation from Everett High School in 1965, Bill enlisted in the United States Army. Bill served as an SP/5 with the 507th Transportation Group in Nha Trang, Vietnam. He was honorably discharged in 1969, and became a proud member of IUOE Local #4.

For the next 45 years Bill worked as a heavy equipment oiler, operator and elevator man.

His family settled in Melrose in 1979, where Bill raised his family and became an integral part of the community. He was actively involved in local youth sports as a coach, referee, umpire and mentor. Bill proudly served the City of Melrose for five terms as a Ward 7 Alderman and as the board’s president in his final year.

He dedicated his time, effort and resources to the community he loved so much, including St. Mary of the Annunciation Parish, Melrose Veterans Advisory Board, Melrose Veterans Memory Project and as president emeritus of the Disabled & Limbless Veterans Organization.

He will be fondly remembered by all who knew him.

Interment with military honors at Wyoming Cemetery in Melrose.