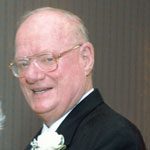 Electrical engineer, veteran had many interests

MELROSE — William J. Mulcahy, 83, of Melrose passed away peacefully on September 10, after a long illness. Catherine, his wife of 60 years, and his children were by his bedside.

Bill was born in Malden on July 1, 1931, son of the late John and Mary Mulcahy. He was a 1949 graduate of Malden Catholic, and went on to earn a degree in Electrical Engineering from Northeastern University in 1963.

He proudly served his country during the Korean War as a Staff Seargant in the Air Force. In 1954, he married the love of his life, Catherine Sullivan, and together they raised nine children.

Bill loved baseball and became involved in Melrose Little League where he served many years as a coach. He also enjoyed farming and gardening, visiting Atlantic City and the Irish Village in South Yarmouth with friends, and listening to Irish music.

He enjoyed cruising and taking a trip of a lifetime to Ireland. He was also an active member for many years of the Italian American Citizens Club in Malden.

In retirement, Bill took great pleasure in spending time with his 22 grandchildren. He would playfully call his young grandchildren “moldy geezers” and “rascals,” and would laugh when they responded by calling him those names. He was also an avid Red Sox fan and was thrilled when they won the 2004 World Series.

Bill is also survived by two of his six siblings: Sister Christine Mulcahy, SSND, of Baltimore, Md. and twin sister Betty McKeon of Nashua, N.H. He was predeceased by his brothers Ed, Jack and Bob Mulcahy and his sister Joan Hutson. Bill was blessed in life to have been a part of a large extended family and is survived by his sister-in-law Irene Mulcahy of Malden and many nieces and nephews.

Visiting hours were from the Gately Funeral Home, 79 W. Foster Street, Melrose on Saturday, September 13, from 2 to 6 p.m. A funeral Mass was held at Most Blessed Sacrament Church in Wakefield on Monday at 10 a.m.

Burial with military honors will be at St. Patrick’s Cemetery in Stoneham.

In lieu of flowers memorial contributions may be made in William’s memory to Trustees of the Chelsea Soldiers Home, 91 Crest Ave., Chelsea, MA 02150.