Warriors blank Watertown, 3-0, for first victory of the season 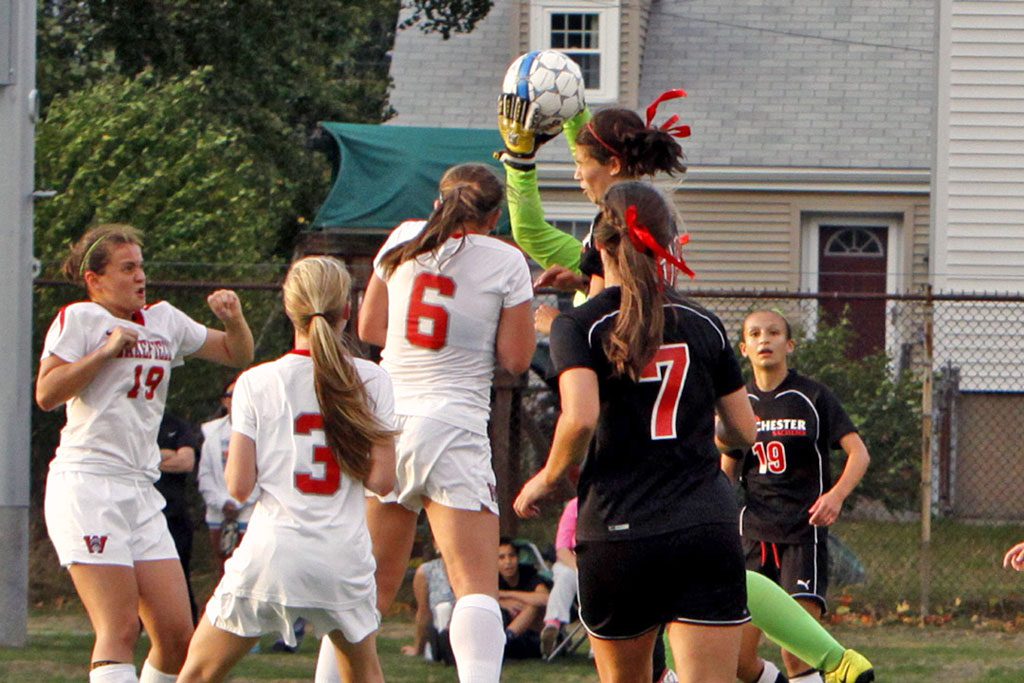 MEGHAN CHAPMAN, a senior (#6), scored two goals for the Warriors in their 3-0 triumph over Watertown yesterday afternoon at Walton Field. (Item File Photo)

WAKEFIELD — The Wakefield Memorial High girls’ soccer team hosted Watertown yesterday and, after a frustrating start, came away with a 3-0 win at Walton Field in the Middlesex League Freedom division opener.

“We’re just looking to establish ourselves at this point. We’re four games in and we feel like we haven’t yet played a full 80 minutes to the best of our ability to end with a victory,” said Coach Jessica Iosua.

Despite dominating the first half, it was Watertown which got the first shot on goal of the game when Sidar Aksir tested Wakefield keeper Kristina Redmond, who was able to make the stop.

Kayla Geaney had a shot on net and then Jillian Raso hit the crossbar, followed by a Geaney shot that hit the right post.

Despite the game being played mostly in the Watertown end in the first half, Wakefield was unable to take advantage and score a goal.

“What was happening in the six is we were getting some shots off but they just weren’t quality shots. We weren’t keeping our composure and what we like to refer to as ‘the calm zone.’ That close where we should be putting balls in the back of the net like we’re passing there. That wasn’t happening so we did truly feel that in the first half we hadn’t challenged their keeper. We hadn’t yet figured out what she would be able to save versus what’s going to go in because we didn’t get quality shots,” Iosua explained.

As a result the teams went into halftime with a 0-0 score.

Wakefield came out strong again in the second half. Geaney had the first Wakefield shot and Mia Joyce and Emily Ryan had shots go wide of the net.

The pressure finally paid off with a header from Meghan Chapman that found its way to the back of the net for a goal to give Wakefield a 1-0 lead.

Sarah Grady had a couple of shots before Chapman scored again to give Wakefield a 2-0 lead.

Wakefield got an insurance goal, this time from Abby Chapman to put the score at 3-0, where it would stand.

“We’re taking the win and we’re certainly happy with that but this team has yet to show exactly who they are. There’s much more potential. I think what we’re lacking now is confidence and in a slight way, intensity. Once that comes we believe that we’ll be able to beat any team we play,” Iosua said.

Wakefield is home again on Thursday at 3:45 p.m. when it hosts Stoneham at Walton Field.