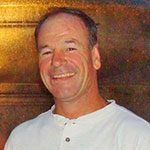 Bill was born in Waltham on Nov. 30, 1961, one of 12 children of the late P. Samuel and Florence (Bianchi) Davis. Raised in the Nonantum section of Newton, Bill was part of the neighborhood that everyone affectionately called “The Lake.” Bill loved the close knit place he called home and kept his lake traditions and relationships close to his heart for the rest of his life.

Billy worked as a heavy equipment operator for the MWRA for many years. In his free time, he was best known for his love of golf, hockey and boxing. He enjoyed many rounds of golf at Mount Hood in Melrose and boxed at the John M. Barry Boys Club in Newton for many years. In his youth, he was a star hockey goalie for Newton North and later his love for hockey continued while playing in leagues as an adult.

Known as “Cheese,” Billy endeared himself to many with his fun loving attitude and frequent risk-taking adventures. Always up for challenge, he was the protector for everyone, and had soft spot for the underdog. Billy was the kind of guy who had a nickname for everybody, even his German shepherd “Mystic” whom he loved, he referred to as “Stick.”

Billy married Stephanie Nastri at St. Lazarus Church in East Boston in 1991 and they lived together in Malden for many years. To Stephanie, Billy was “the greatest husband there ever was” and they were best friends up until the day he died. Billy was happy spending the day together near the ocean at Wingaersheek Beach or spending time with family at home in Malden. Billy loved his in-laws and their families, especially his late father-in-law Frank Nastri who he affectionately called “Frankie Bubba.” Billy will be missed but his memory will endure in the hearts of those who loved him.

Bill was the former husband and best friend to Stephanie D. (Nastri) Davis. He was the caring brother of Carol Schaaf of Las Vegas, Nev., Diane Herne of Gardner, Linda Meek of Somerville, Robert Meek of Brighton, Rick Meek of Waltham, Sandra Davis of Northampton, Darlene Guild of Austin, Texas, Joyce MacDonald of Newton, Sam Davis of Newton, Tammy Catino of Marlborough and the late John Meek. He was the loving son of the late Florence and Samuel Davis and cherished son-in-law of Alice and the late Gino DeSimone and the late Frank Nastri. He is also survived by many nieces and nephews.

Relatives and friends gathered in honor and remembrance of Bill’s life during visiting hours at the Robinson Funeral Home, 809 Main St., Melrose on Monday, Oct. 12, from 3 to 8 p.m., and again on Tuesday morning at 9 a.m. before leaving in procession to Sacred Hearts Church, 297 Main St., Malden for his funeral Mass celebrated at 10 a.m.

Gifts in Billy’s memory may be made to the John M. Barry Boys and Girls Club, 675 Watertown St., Newton MA 02460. For online tribute or to share a memory visit RobinsonFuneralHome.com.