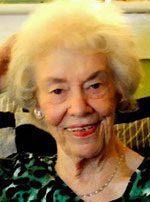 MELROSE — Ruth L. (Noseworthy) Melia, 89, a resident of Melrose and formerly of Randolph and Medford, entered into eternal life on Monday, October 12, at The Elmhurst Golden Living Center in Melrose following an extended illness.

Ruth was born in Somerville on August 15, 1926, a daughter of the late Edward Noseworthy and Emma Jane (Sparks) Noseworthy. She grew up in Somerville where she was educated in the Somerville Public School system and graduated from Somerville High School. Ruth worked as a supervisor for the National Fire Protection Association for over 20 years. She was a member of the Trinity Church in Randolph where she was active with the Altar Guild and worked in the church thrift shop. She loved cooking, dancing to the jitter bug and playing Sudoku.

Ruth was the devoted mother of Karen Gerstel and her husband Leo of Melrose and the late Catherine Walsh and Barry Melia and his surviving wife Peggy of Dracut. She was the loving Nana to Kevin Gerstel, Bridget Gerstel, Timothy Melia, Brian Walsh, Karen Walsh, Karen Craffey and loving GG to Morgan, Catelin and Bria. She was the dear Godmother to Jane Wagner. She was the beloved sister of the late Grace Wagner, Gordon Noseworthy, Florence Noseworthy and Violet Noseworthy. She is also survived by several nieces and nephews.

Relatives and friends were invited to attend Ruth’s funeral service on Wednesday, October 14, at 11 a.m. in The Carr Funeral Home, 1159 Main St., Melrose. Her burial followed at Woodlawn Cemetery in Everett.

In lieu of flowers, kindly make a memorial donation in Ruth’s name to the Alzheimer’s Association, 311 Arsenal St., Watertown, Mass. 02472.