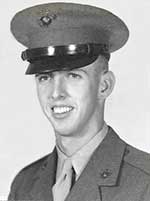 He worked for many years as a self–employed contractor. He enjoyed carpentry, John Wayne, animals and pets. He was a lifetime member of the National Rifle Association.

Bill had a great love for his wife and family. He had a dry sense of humor and a quiet acceptance and appreciation of what life offered him.

Family members include his loving wife of 22 years, Elizabeth (Snow) Poor of Laconia, N.H. and formerly of North Reading; sons, Matthew E. Poor of Englewood, Fla. and Thomas J. Murphy IV of Pepperell; eight grandchildren; six great–grandchildren, many nieces and nephews. He was the father of the late Melissa Dejesus and Katherine Poor; brother of the late Alan and Richard Poor and husband of the late Grace McDonald.

His funeral service will be held at the Croswell Funeral Home, 19 Bow St., North Reading on Friday, June 3 at noon. Calling hours will be held prior to the service from 10 to 11:50 a.m. Interment will be in Riverside Cemetery in North Reading. In lieu of flowers memorial donations may be made in his memory to the charity of one’s choice. www.croswellfuneralhome.com.