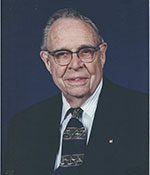 Born in Williamsville, Vt. on June 10, 1921, he was the son of the late Charles R. Thomas and Lena A. Hill. He was a graduate of Brattleboro Union High School and Tufts University, where he earned a degree in Electrical Engineering.

Following his academic pursuits, he enrolled in the United States Navy where he served as a midshipman on the USS Meredith OD890 during World War II.

Bud, as his family and friends knew him, enjoyed a long life filled with love and lasting friendships. He had a passion for a great meal which was always accompanied by a few fingers of scotch. He enjoyed decades of summers in the log cabin he built with his wife, Harriett. As an avid outdoorsman, he would take pleasure in the loons calling, hummingbirds feeding and canoeing around the lake, just taking in the wildlife.

On Sundays, he could be found at First Parish Congregational Church in Wakefield, where he was a faithful member for many, many years. He also was a committed member of the Golden Rule Lodge AF&AM, Scottish Rite Masons and Aleppo Shriners where he earned his 50th year Veterans Medal.

He was a dedicated blood donor to the American Red Cross donating more units of blood than one can count! He proudly and generously contributed to most every non-profit organization in hopes of making life easier for many. Most recently, he was living at Sunrise Assisted Living where he was able to continue his active and social lifestyle. He enjoyed the boat/fishing trips, musicians and most notably, winning the bocce tournament.

He was the beloved husband of the late Harriett A. (Neal) Thomas. They were the parents of Neal Thomas and his late wife Kimball Thomas and Susan A. (Thomas) Qualters and her late husband John E. Qualters. He is also survived by his grandchildren Terri Stanley, Tracy Garrett and her husband, Shawn, as well as Laurie, Erin and Amy. He treasured silly times with his great-grandchildren, Colin, Kiera, Keegan, Cayden, Thomas, William and George. He will be dearly missed but never forgotten.

His funeral service will be held on Tuesday, May 31, at the First Parish Congregational Church, 1 Church St., Wakefield at 11 a.m. Burial will be at Forest Glade Cemetery in Wakefield.